Felix the Cat by Craig Yoe 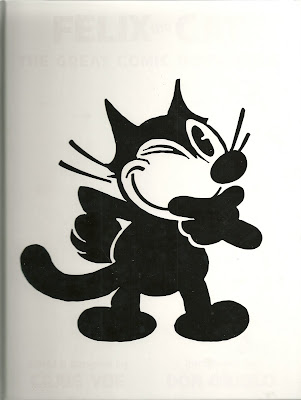 Since this is another of Craig's books that I was privileged to have been able to help with, let's call this an unabashed plug rather than a review.
As a child, Felix the Cat was my favorite cartoon character. Just before I was born, a whole new series of cheap but now well-remembered Felix cartoons had premiered on TV. This was the one where he had his literal bag of tricks. Before that, all he ever needed was a metaphorical bag of tricks.
Although he still has his own website, Felix debuted more than eight decades ago in silent cartoons where his imaginative romps won over the public in the pre-Mickey days when cartoons were thought of as a simple novelty. Though his fortunes have waxed and waned ever since, he has at various times ruled the toy stores, the funny pages and the lowly comic book. That's where Craig comes in.
This book offers a brief and well-illustrated history of Felix and those associated with him but consists mainly of a long and delightful selection of stories from the black cat's comic book adventures. Flying carpets, zodiac creatures, giant talking vegetables, robots, submarines, fairies--in Felix's world of pure imagination, it's all in a typical day.
Published originally by various companies in the 1940's and early '50's, much of the
wonderfully cartoony art is by artist Joe Oriolo, whose son Don provides a nice introductory piece. There are lots of rare photos, illustrations and covers as well as an absolutely ingenious back cover gag utilizing Felix and the book's barcode!
This is a banner year for new father Craig Yoe with a number of excellent and well-received collections of little-seen comic books and strips already out and a few more due before the end of the year. That makes it also a banner year for fans of vintage comics. FELIX THE CAT is available in comic book shops and some bookstores or at a nice price from Amazon. See below.

Posted by Booksteve at 9:05 AM