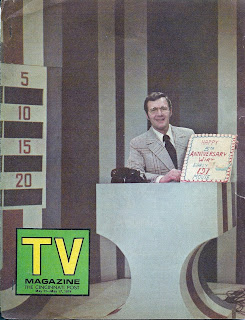 Seen here is a gentleman named Wirt Cain. Back in the sixties, Wirt was Ed McMahon to Nick Clooney (George's proud papa) on Nick's Cincinnati talk/variety series. As was often the case in those days, he doubled as a staff announcer and throughout the early seventies hosted such local broadcasting staples as BOWLING FOR DOLLARS, DIALING FOR DOLLARS and THE EARLY NINE MOVIE. (At one point circa 1972, my family was actually called as the randomly chosen phone number on the movie show! We could've won 200 bucks if I had remembered that I had wanted to watch the movie that day after school! My spooky memory being what it is, though, I can tell you that the film was WHAT'S SO BAD ABOUT FEELING GOOD? with George Peppard and Mary Tyler Moore. Sigh. Important stuff escapes me but this I recall?) Nick's show switched stations at one point requiring Nick, by contract, to remain off-air for one year. When he returned it was with Glenn "Skipper" Ryle as his new sidekick, Wirt having stayed behind at the other channel. The two remained friends though and when I held a booksigning with Nick in 1994, I asked him about Wirt. He told me that Wirt was one of the nicest and most professional folks with who he had ever worked. He added that Wirt was then living in Texas. A few years ago Nick was appearing as a popular DJ on a local "Standards" radio station and at some point suggested that Wirt return to Cincinnati and do the same. He did! I enjoyed hearing Mr. Cain's pleasant Southern voice again but, as before, he was wearing several hats. One day, about thirty years after I answered his call and lost the 200 dollars, he called me at work to talk about our buying advertising time on his show! Well, that simply wasn't going to happen (do you folks have any IDEA how much radio ad time costs? And you think GAS is overpriced!) so instead we had a marvelous talk about his career. One of the things he mentioned was that he had been in several movies including THE CHASE with Charlie Sheen in 1994. Last week, I was mindlessly flipping channels on the remote (Don't give me that look. We all do it.) and I came across THE CHASE already in progress. Just as I was telling my wife that this was the film that Wirt Cain was in, he appears onscreen as a TV anchorman! The camera pulls back to see his set and HIS onscreen cameraman who turns out to be none other than Ron Jeremy whom I got to meet recently and wrote about here: http://booksteveslibrary.blogspot.com/2008/02/ron-jeremy.html
Wirt disappeared from Cincinnati again when the oldies station changed formats a couple of years back. I hope he's well. Sometimes it just amazes me the folks from my formative years that I actually get to meet! Thanks for talking with me that day, sir.
Posted by Booksteve at 6:39 PM