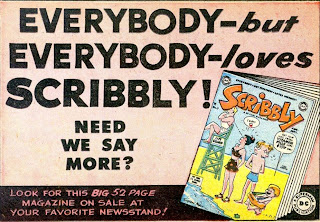 Well, apparently not or he'd still be around today. SCRIBBLY was a marvelously funny strip by Sheldon Mayer in the Golden Age. While the comic book SCRIBBLY was published by National (DC), the strip actually appeared in the late thirties in several comics NOT published by them. Vaguely autobiographical, it lightly featured an ethnicity not usually found in comics. Scribbly was a typical geeky teenage boy who was also a budding cartoonist. Along the way in his serial sitcom-style stories, we meet Ma Hunkel who becomes the original Forbush Man-like Red Tornado! While Mayer concentrated his efforts for years on editing for DC's sister company All-American (and its head honcho M. C. "Charlie" Gaines), he still manged to produce Scribbly stories. By the 1950's, Mayer switched to his new and most lasting creation, SUGAR & SPIKE but even then managed to include a grown-up Scribbly in one of their early stories! No, everybody doesn't love the unjustly forgotten SCRIBBLY but I'll bet a lot of readers young and old alike would love him if DC would give them a chance today!
Posted by Booksteve at 6:41 PM