Movies That Fell Through the Cracks # 38 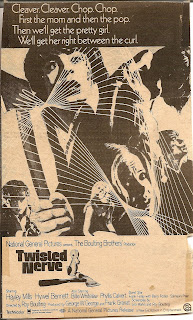 Haven't discussed the lovely Ms. Hayley Mills here in some time. Today's movie is a 1968 picture that reunited Hayley onscreen with her true love from THE FAMILY WAY of 1966. I am, of course, referring to her controversial romance ( and marriage!) with much older director Roy Boulting and not just to her re-teaming with co-star Hywel Bennett. TWISTED NERVE was, according to IMDB (I haven't seen it) a dark, misguided, psychological drama mistakenly marketed in theaters as a slasher film. Bennett plays a grown man with mental issues who regresses to a 5 year old personality. Hayley's character befriends him only to have violent tendencies brought on by confusing sexual feelings. Hmmm... starting to wonder about Bennett. In his previous picture with Hayley (itself obscure if not for her nude scene and Paul McCartney's score) they were unable to consummate their marriage. Here, sexual attraction sets him off and in a couple more years he becomes PERCY, recipient of the world's first penis transplant! For Mills fans, IMDB commenters note that she looks anorexic in this one. Think I'll stick with THE TROUBLE WITH ANGELS.
Posted by Booksteve at 11:10 AM