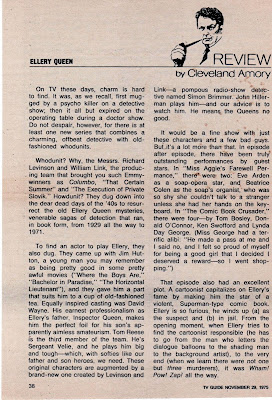 Recently, I’ve dug back through the video archives here at the Library and watched most of the episodes of ELLERY QUEEN, the 1975 TV series starring Jim Hutton and David Wayne. A marvel of casting, Levinson and Link's ELLERY QUEEN presented the sometimes annoying Hutton the opportunity for a splendidly absent-minded genius characterization and he ran with it! At times reminiscent of Jimmy Stewart’s Elwood P. Dowd in HARVEY, Ellery is endearingly quirky but inevitably sharp. As his father, the police inspector, David Wayne (whom my mother misinformed me was John Wayne’s son when he had appeared on BATMAN as the Mad Hatter!) is equally well-served and plays it as gruff but loving. The two of them come across so well as father and son that one is able to suspend disbelief easily. Ken Swofford as a FRONT PAGE-style reporter and a pre-MAGNUM PI John Hillerman as a supercilious radio crimesolver appear from time to time as foils for "the Maestro." As with any good "fair play" mystery, the audience is given all of the same clues as the detective. The gimmick here was that Ellery, toward the end of every episode, would break the fourth wall and address the audience as to whether they (we) had yet solved the mystery. This was a variation on the forties radio series in which a guest panel would be onstage and asked to give their theories on the episode’s crime before Ellery solved it.
Preceded by a TV movie and an even earlier (and horribly cast) pilot with Peter Lawford (!), the series, in spite of its quality and good reviews (as seen here Cleveland Amory’s from TV GUIDE) didn’t last and has yet to be issued on DVD. It does turn up in reruns from time to time, though, and is highly recommended. I tried to read some of the ELLERY QUEEN books while imagining Hutton in the lead but it didn't work. The literary Ellery comes across as pompous and lacks the quirks Hutton brought to the role. Hutton would appear a year later in a memorable 4 part episode of ONE DAY AT A TIME but then took ill and passed away in 1979.
Posted by Booksteve at 9:24 AM