The Monkees by Joe Orlando 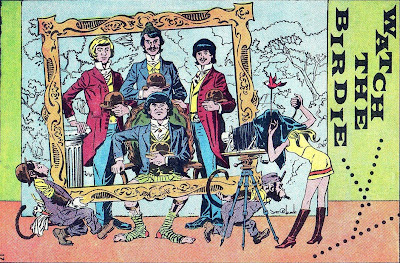 I hate it when real life messes with my fantasy. Such has been the case over the last few days what with illnesses with friends and family, work problems even though I've been off, the usual end of month financial crisis, more potential car problems and then yesterday I found where our smallest cat--the aptly named Mischief--had made a nest in my son's closet...in what USED TO BE a box of collectible magazines!!! Totally shredded!! COMICS INTERVIEW, COMICS SCENE, AMAZING HEROES (including one copy of the issue with my very first article in it!) and FAMOUS MONSTERS!!!! UGH!!!!! None of which has anything to do with this neat but little-seen Monkees illustration by then former MAD artist and then future DC executive, Joe Orlando. This was done in 1967 for the second issue of National's hybrid teen mag/comic called TEEN BEAM!
Posted by Booksteve at 1:07 PM