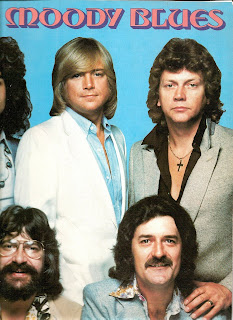 On the way home from work today, I heard on the radio that the Moody Blues were playing in town tonight. Other than Paul McCartney, the Moody Blues are the only live music act I've paid to see twice! The first time was circa 1978 on their comeback tour after a number of years on hiatus. The second was in 1981 after they had proven themselves a viable band and not just an oldies act (not that I have any problem with oldies acts!). On record, their music with its swirling flutes, mellotron and occasional symphonic accompaniment can admittedly sound quite pretentious. The sometimes pompous, self-consciously artsy lyrics don't always help. As a live band in that era, however, they rocked hard on both old and new material with screaming guitars and soaring vocals the likes of which I've never heard before or since! Justin Hayward, owner of one of rock's smoothest voices anyway, actually hit and held that almost impossibly long high note in TUESDAY AFTERNOON...both times! Former Yes keyboardist Patrick Moraz (whose image on the tour book seen here fell just outside my scanner) was flamboyant as the replacement keyboardist for original member Mike Pinder. After about 15 years of touring, in a sad and shameful moment for the band, the rest of the group would claim that Moraz had never actually been a member but rather only a hired musician. Ummm...okay. The keyboardist for a keyboard-based rock band isn't REALLY an actual member?? The case actually aired live on Court-TVin the early 1990's with the group members testifying earnestly that Moraz had misunderstood his role all those years! Sigh. Kind of like the Beach Boys over the years and more recently Herman's Hermits. Just stop arguing over legal semantics and make some music!
I haven't been to a concert in years. I passed up Simon and Garfunkel a couple of years back because of the outrageous ticket prices. I WAS going with a friend to see Stevie Nicks next month (she got two tickets for her birthday) but she's recently become involved in a new relationship (my friend, not Stevie) so I've offered my ticket to him. That's why I'm sitting here typing now because if I WERE going to see a concert, I'd be willing to bet that the Moody Blues (and quite frankly I'm not even certain how many members of the classic lineup are left) would STILL be a great concert! Thanks for the music, gentlemen! Rock hard, tonight!
Posted by Booksteve at 6:41 PM