I Am Iron Man 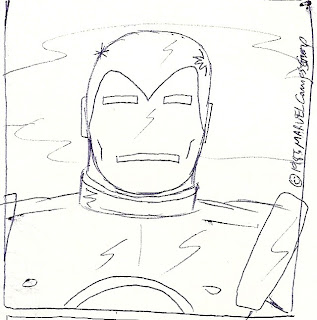 Well, not really but I am BACK! Payday comes, the broadband gods are appeased and blogging resumes. With what little was left of my paycheck I took my family to see IRON MAN. (We went before the prices changed.) Surprisingly, the theater had only about a dozen people ourselves included!

Downey really is, as TIME recently said, finally living up to his promise and enjoying the career he was meant to have. Underneath the quips and comebacks, he adds a depth to Tony Stark that I've never seen in a comic book film. In fact, the realization that a film as CGI-driven as this can be called "character-driven" speaks volumes for director Favreau and crew. Jeff Bridges, always a quirky actor at best, here gives a marvelous, almost endearingly straightforward performance as the villain!
We went straight from work and I've got too much to catch up on right now to write a full review so I'll just add my vote to those who say IRON MAN is one of--if not THE--best super hero movies yet!
Oh, and I just wanted to yell at the rest of the folks leaving the theater as soon as the closing credits rolled. "People! Have you not been to one of these things in the last few years? There's ALWAYS cool stuff after the last of the credits. In this case, "cool" is putting it mildly. If you haven't already heard, I won't be the one to ruin it for you but PLEASE stay all the way. It's worth it!
Oh, one last bit of trivia. While we were wading through the millions of names in the aforementioned credits, I noted (and I forget as what) the name Adam Austin. "Adam Austin," as hardcore Marvel fans will recall, was a pseudonym used by artist Gene Colan when he first started at the so-called House of Ideas back in the mid-sixties. Seems Colan didn't want his regular bosses at DC to know he was moonlighting. Colan would go on to become THE most-remembered artist on...wait for it...IRON MAN! Wonder if THIS Adam Austin knows that?
Accompanying art here, however, is yet another interpretation of ol' Shellhead by yours truly, this one from an unrealized 1985 project.

Posted by Booksteve at 7:27 PM