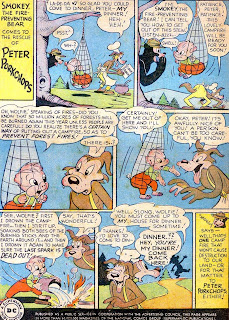 Here's a DC PSA from either the late '40's or early '50's in which Smokey the Bear (as in "Only YOU can prevent forest fires!") meets Peter Porkchops. As all continuity buffs know, after an accident in a steel mill years later involving a meteorite, Peter became the Zoo Crew hero, Pig Iron! Now Pig Iron, along with Captain Carrot and the rest of the Earth C anthropomorphic heroes met Superman. Superman, of course, knows Batman. Batman has fought the Punisher. The Punisher has rather infamously met Archie who has, in turn, met the Mighty Crusaders. Whilst we're on the subject, Batman and Superman have also fought Aliens and Predator and Superman has also met Bugs Bunny, Hoppy the Marvel Bunny and the Nestle's Quick rabbit! Wow! What a small multiverse it all is when you begin to think of it like that. From Smokey to Nestle's in just a few short Kevin Bacons.
Posted by Booksteve at 5:23 PM