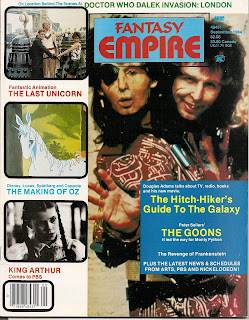 Hal Schuster was a publisher who, in the early 1980’s, published a number of comics, film and TV magazines of not particularly sterling quality. They looked cheap. They had bad layouts with lots of typos and blurry photos and sometimes articles that just stopped without actually coming to an ending! That said, Schuster’s mags, although barely above fanzine level at times, provided often excellent coverage of various aspects of pop culture just not being covered elsewhere.
One example of this is FANTASY EMPIRE, a magazine for us American anglophiles. Offering in some cases the ONLY stateside coverage of classic British TV series such as BLAKE’S SEVEN and SAPPHIRE AND STEEL, FANTASY EMPIRE was often a revelation.
The particular issue seen here, number 13 from 1984, features a very early article by NYT bestselling author, superblogger and fanboy favorite Neil Gaiman! As Douglas Adams’ official biographer, Neil is the voice of authority on the coverage of HITCHHIKER’S GUIDE TO THE GALAXY, illustrated with stills from the then-current (and ultra-cheesy) TV version.
Also here is British pop expert John Peel with an article on THE GOONS (Spike Milligan, Peter Sellers and Harry Secombe). By that point, I had heard most of their radio episodes but still had little or no info on them until this mag! Editor Peel also chimes in with the required DOCTOR WHO piece as well as an article on a BBC version of King Arthur and a look at THE LAST UNICORN.
News, previews, a feature on Hammer’s FRANKENSTEIN films and an introduction to scary little Fairuza Balk round out the issue. It’s all the kind of info you could get today with a quick spin around the ‘Net but in those days, these kind of mags gave us so much that otherwise we would not have had. Thanks, guys!
Posted by Booksteve at 4:26 PM