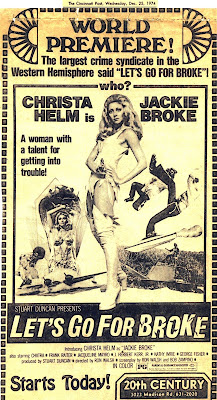 Just a heads up that after two years of intermittent attempts on my part, the venerable Internet Movie DataBase has finally added Christa Helm's movie, LET'S GO FOR BROKE. Strangely enough, even though I spent more than an hour typing and retyping info on their online forms last week, they've ended up with a much more complete listing than I gave them. Apparently someone else (??) was also submitting info. They use my quotes in the Trivia section but they also list people that I did NOT tell them about so???

Oh, and while they were adding, they also added Christa's STARSKY AND HUTCH episode. Go check it out at Christa Helm.
Posted by Booksteve at 1:29 PM