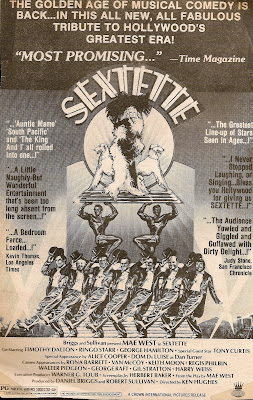 Yesterday I mentioned Mae West's SEXTETTE in passing. Here's a VARIETY ad for that film prior to its pretty-much-never-happened wide release. Its very existence pegs it as an odd bird. Mae West, herself, is an odd bird and looks like one here...complete with plummage!
Mae West began her career onstage and later in a series of pre-code films that were fairly open (for their day) about one particular subject: S-E-X. She insisted on writing her own lines and doing things her way and she was granted these things at a time when women mostly were not. The early Mae West is a true pioneer of both feminism and the sexual revolution.
Ms. West was allegedly banned (and banned from even being mentioned!) on radio do to a now quaint Adam and Eve sketch with the great Don Ameche. There was no way she would have been allowed on early television (although there is one MISTER ED episode...don't ask!). By the sixties, she was revered by film buffs as a unique star as well as a harbinger of sixties permissiveness. The problem was that she was still around.
In 1969, it became a bit of a joke that the aged West chose to make a belated return to film in, of all things, Gore Vidal's X-rated sex-change satire MYRA BRECKINRIDGE. As ever, West insisted on doing things her way, not caring particularly what her young director or co-stars had to say about it. This led to a well-publicised feud with star Raquel Welch. The end result is a sad, psychedelic mish-mash of a film. The 76 year old legend oddly comes off best and yet seems to have been inserted from a different picture entirely. After the hype settled, (said hype including an album by West!), MYRA came to be looked at as a bizarre coda to a unique career. That is...until SEXTETTE.
In 1978, now 85 years old, Mae was sewn into yet another skin-tight outfit with outrageous headgear and somebody convinced her that it would be a good idea to make SEXTETTE, ostensibly an adaptation of her controversial 1930's stage play, SEX. Although I question how this ever could have seemed like a good idea, in execution it is a veritable pile up of train wrecks.
A young, handsome and pre-007 Timothy Dalton co-stars as West's character's new husband who is unable to consummate his marriage because all of her previous husbands and lovers keep showing up. The episodic farce that follows features an eclectic cast including Keith Moon, Alice Cooper, Dom Deluise, George Hamilton, Tony Curtis, George Raft and Ringo! And Regis Philbin, too!! It's all very campy and self-indulgent but, as vanity projects go, admittedly well-made. It was, in fact, directed by Ken Hughes who had previously directed, among many others, the film I saw on my first date--CHITTY CHITTY BANG BANG. It scores big in the so-bad-its-good department, however, because no matter what you do, its hard to get past the sad spectacle of Mae West herself.
Note the hype in this ad and how easily much of it could have been--and probably was--taken out of context. Dick Cavett interviewed Mae on a television special around this same time and, as herself, she still had it. SEXTETTE, rather than being the crowning jewel to her career, took over the "bizarre coda" slot and made MYRA BRECKINRIDGE look pretty darn good after all.
Posted by Booksteve at 6:10 PM