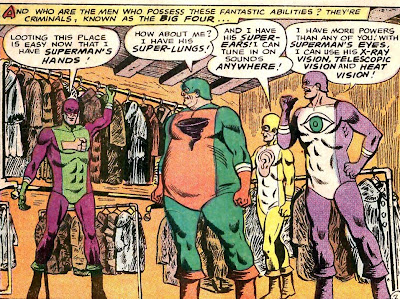 Okay, the premise here is that Superman's dead, see? And somehow his body parts have been transplanted into these lackluster (and badly costumed I might add) bad guys with the "cool" name of...the Big Four! This Ross Andru (with Mike Esposito?) panel from a late sixties WORLD'S FINEST shows the guy with Supes' lungs, the guy who got his eyes, the crook with his hands (Aside-My wife's father was a doctor who worked on the first successful hand transplant operation in 1965!) and also...the bad guy who had an ear transplant? Are there such things as ear transplants? If so, how do they work? Could he really get Kal's super-hearing from that? And if he did, wouldn't the other guys still make merciless fun of him? Be kinda like when BLACKHAWK's Chuck became "The Listener" and wore pajamas with little ears all over 'em. Lame.
Posted by Booksteve at 8:25 AM