The Kings of Silent Comedy 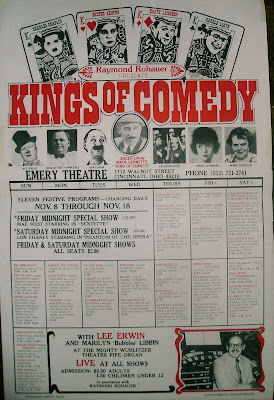 In the late 1970’s and early 1980’s the Ohio Valley Chapter of the American Theatre Organ Society showed classic films on the giant screen of downtown Cincinnati’s long vacant EMERY THEATRE. As a budding film buff I was delighted to spend many a weekend there in the company of Cary Grant, Fred Astaire, Orson Welles, William Powell and Myrna Loy, the Marx Brothers, Jean Harlow and Katherine Hepburn. For eleven days in 1979, however, I was given the rare opportunity to immerse myself in silent comedies!
Raymond Rohauer was a much-maligned businessman who helped Buster Keaton rescue and exploit his classic film catalog (many of which had been believed lost!) in the early sixties. By the late seventies, it’s clear he was continuing to do the same thing with other silent films. I’m not certain if this particular program was a travelling exhibition or just something arranged for the Emery but I do know I was there as often as I could be!
For the most part the prints were the best of the best and all were projected at the right speed as opposed to the too-fast mode often granted silent films! The photoplays themselves were a combination of classics and rarities. Chaplin appears, of course, but the show wisely emphasizes the OTHER stars of the day instead of lionizing the little tramp at their expense as was so often done when discussing silent comedy in those days. If anyone can be said to take center stage it’s the great Keaton, represented every single evening and by films from THE GENERAL and STEAMBOAT BILL, JR to a short with his mentor, 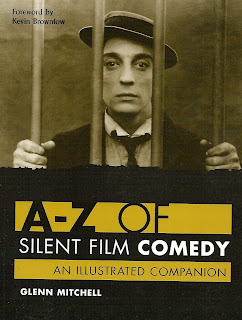 Fatty Arbuckle.
Harold Lloyd appears frequently in both his glasses character and his pre-glasses character. Baby-faced Harry Langdon gets a good representation, too, including LONG PANTS and THE STRONG MAN, both early Frank Capra films! Along the way we also were treated to a bit of Mabel Normand, Ben Turpin, W.C. Fields and even TILLIE’S PUNCTURED ROMANCE, Mack Sennett’s 1914 comedic melodrama with the great Marie Dressler (and co-starring Charlie Chaplin as the villain!).
Note that the films all featured live accompaniment from theatre organ legends Lee Erwin and Bubbles Libbin. Both were regulars at the Emery for silent features. The advertised special midnight showings for the weekend were Mae West’s then-new SEXTETTE (a horrible modern comedy with Timothy Dalton, Keith Moon and Alice Cooper) and a totally out-of-place showing of Lon Chaney’s PHANTOM OF THE OPERA.
All in all, a delightful time was had by 20 year old me and I came away with a whole new love and respect for silent comedy which led to us picking up a number of books on the subject over the years including this fairly comprehensive encyclopedic reference, A-Z OF SILENT FILM COMEDY-AN ILLUSTRATED COMPNION.
Posted by Booksteve at 10:03 AM