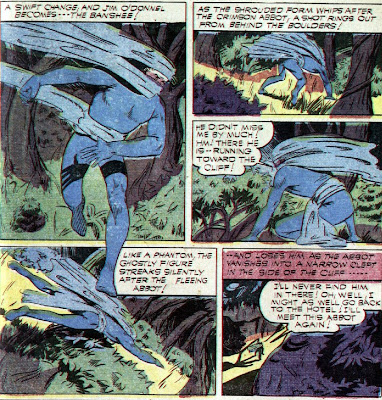 Ya miss a couple days blogging and before you know it, it's that time again. Actually, I'm thinking of changing the name of this feature to "Barely Costumed Super Hero of the Week" as these guys sometimes show an awful lot of skin. This guy, for example, is the Banshee from 1942'sV COMICS. I don't see any seams in that "costume" and the hands look naked...only blue. You'll note that there's never a really revealing shot so it's entirely possible this nutcase simply painted himself blue and rather badly wrapped a couple scarfs around him and "Voila!" Actually the "scarfs" seem like smoke a little in the first panel but not elsewhere. I'm thinking they're just the worst face covering since the Shadow's!
Posted by Booksteve at 4:43 PM