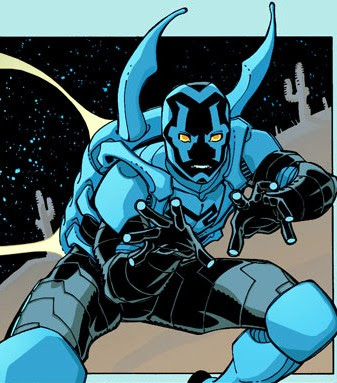 Lest you think that only Golden Age heroes had costumes only Mr. Blackwell could love, here's the current version of the venerable BLUE BEETLE. Okay, so it's actually supposed to look like a beetle this time around. I get that. I don't really see a great need for it but I get it. Imagine having to DRAW this guy consistently from panel to panel though! He's almost as complicated looking as IRON MAN! The original versions of BB may have been pretty non-descript and, let's face it, Ditko's cool sixties version really was just a Spidey redo but this guy? Hope therapy for the artists is covered by DC's contracts.
Posted by Booksteve at 6:52 AM