Movies That Fell Through the Cracks # 35 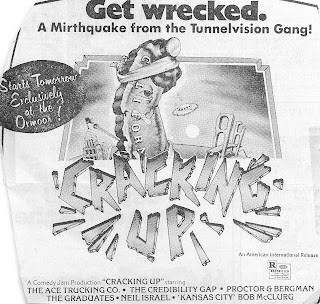 Talk about a fascinating cast! 1977’S CRACKING UP presented a number of the folks who would later turn up in Christopher Guest’s ingenious comedies—Fred Willard, Harry Shearer, Michael McKean and Edie McClurg for example. McKean’s TV partner David L. Lander also appeared ("Squiggy" to Michael’s "Lenny."). The writing credits as well as the starring credits on this TUNNELVISION follow-up include the sketch comedy troupes Ace Trucking Company, the Credibility Gap, the Graduates(?), Neil Israel and the two main guys from The Firesign Theater, Peter Bergman and Phil Procter (who later did the subversively hilarious J-MEN FOREVER). Also in the cast were writer/actor Jim Staahl who would later host the early eighties LAUGHTRAX, the series that introduced (for better or for worse) Howie Mandel, the late Stephen Stucker who stole both AIRPLANE films effortlessly from all the old pros with lines like the unforgettable, "There’s a sale at Pennys!" and the great Fee Waybill and the Tubes, now longtime cult favorites!
Sounds fantastic! The plot seems to be something about an earthquake in California and I’m betting the whole thing is horribly disjointed and unfunny. I wouldn’t know, though, because it never even played around here and while I do recall seeing it on VHS in a store one time in the eighties, I still have never seen it. Looks like CRACKING UP fell through one of its own cracks.
Posted by Booksteve at 5:13 PM