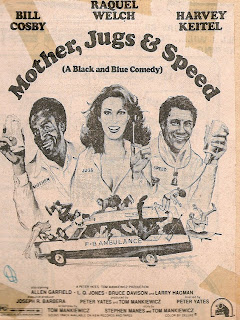 One of my all-time LEAST favorite movies is MOTHER, JUGS AND SPEED, an alleged black comedy with a bunch of talented folks on both sides of the screen going about everything all wrong (IMHO). Judging by the comments on IMDB, I seem to be in a minority but I really disliked this 1976 movie. Supposedly designed in the vein of M*A*S*H, the episodic story deals with a private ambulance service but takes a wide turn from comedy to brutal drama and never looks back. The impressive cast includes Bill Cosby as "Mother" Tucker (get it?), Raquel Welch rather obviously cast as "Jugs" and bizarrely enough, Harvey Keitel as "Speed!" Perhaps even more bizarrely, Keitel comes off best in this early, uncharacteristic role. A post-JEANNIE but pre-DALLAS Larry Hagman has a genuinely disturbing scene in which his character rapes an unconscious young woman. Ugh! The eclectic supporting cast includes Second City vet Severn Darden, GET CRAZY’s Bill Henderson and Allen Garfield, the ever-sleazy L Q Jones and Bruce (WILLARD) Davison.
The whole blood 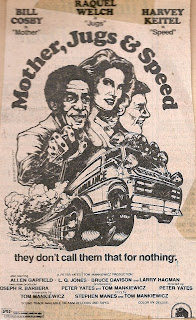 y (literally in some cases) mess came from the mind of screenwriter Tom Mankiewicz who wrote two of my favorite James Bond films (LIVE AND LET DIE and DIAMONDS ARE FOREVER), contributed to the first two SUPERMAN films with Christopher Reeve and created TV’s HART TO HART (which starred favorite Stefanie Powers!). Directing this misfire was Peter Yates whose credits include the Steve McQueen classic BULLIT and the Oscar-winning BREAKING AWAY.
Incredibly, there was an attempt at a TV sitcom pilot (with an extra "g" added in "Juggs" for no apparent reason) two years later starring Ray Vitte, an actor later killed, according to IMDB, in a scuffle with police, in the Cosby role.
Posted by Booksteve at 11:22 PM