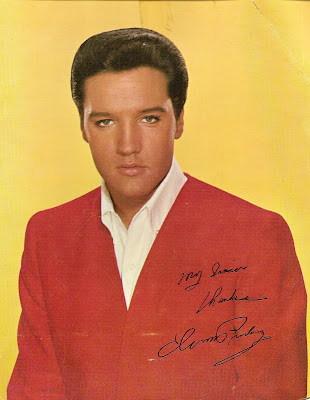 Elvis Presley would have been 73 years old today. I find it hard to imagine what he’d be doing today if he had lived because I find it difficult to envision an Elvis who could’ve beaten his demons. I don’t remember the first time I saw or heard of Elvis on television or radio. It seems as if, in my lifetime, he has always been the iconic demi-god of rock and roll. By the mid-sixties, however, his actual career had followed the paths of Danny Kaye, Bob Hope and Jerry Lewis, resulting in tailor-made motion picture vehicles of which the star himself was often the only redeeming quality. Unlike those gentlemen, though, Elvis didn’t do TV specials or live performances any more. Just fan-pleasing movies. I remember the first one I saw and it’s still my favorite (in spite of nearly universal pans on IMDB). DOUBLE TROUBLE was a 1967 spy spoof (one of about 800 that year alone! Spies were hot in the mid-sixties) in which Elvis was a musician traveling abroad and pursued by both a worldly villainess and a 17 year old ingenue. I was playing with my friend Timmy at his house one Sunday afternoon. Actually, we were reading coverless JIMMY OLSEN comics on his front porch. Suddenly, his mom comes out and suggests we go to the Liberty Theater to see the new Elvis movie. A quick call to my mom and it was a done deal. We took the bus down eleven blocks to the theater and went in in the middle of the movie. In those pre-STAR WARS days you could do that. Then we simply sat and enjoyed it until we got to the part where we came in. A year or so later, when I got my first LP record player, I actually talked my parents into buying the soundtrack album in spite of its extravagant $3.98 pricetag. The picture seen above was a free insert in the album. Happy Birthday, Elvis and thanks for the entertainment!
Posted by Booksteve at 8:34 AM