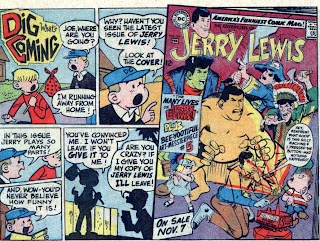 Here's an unusual hybrid ad from late in the run of DC's ADVENTURES OF JERRY LEWIS comic. This one combines the ad itself (featuring the current issue's Neal Adams-drawn cover) with one of the ubiquitous Henry Boltinoff gag strips that ran for nearly thirty years in DC comics.
Posted by Booksteve at 5:20 PM