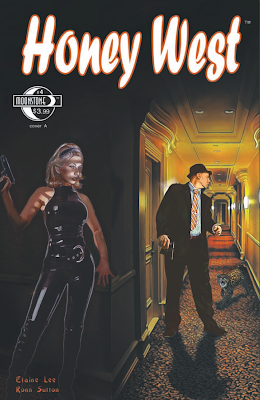 There are a lot of comics out there these days competing for your hard-earned money...and not as much of that hard-earned money to go around anymore. Sometimes, a recommendation from a friend is what's needed to get you to try something out of your norm. Here comes that recommendation.
Tomorrow on the stands besides the 23 DEADPOOL titles, the 14 CAPTAIN AMERICA titles, the 9 GREEN LANTERN comics and the odd issues of anything DC that aren't tied in to the latest company crossover...you'll find HONEY WEST # 4.
If you aren't familiar with the character, Honey West is best remembered for her TV incarnation of the early sixties as played by the late Anne Francis. She was, in essence, designed to be an American Emma Peel before THE AVENGERS had even debuted on these shores. She was cool in her jumpsuits, she was clever, sexy and, quite frankly, she could kick your ass with martial arts. If that didn't work, she'd sic Bruce, her pet ocelot, on you. She also had lots of bathing scenes, got in lots of compromising situations and just generally had some fun TV times. 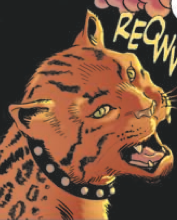 Well now she's back in a new comic book series from Moonstone, the second story arc of which is done up nicely by writer Elaine Lee (best known for the play STARSTRUCK and its subsequent graphic novel) and artist Ronn Sutton, a regular (and invaluable) contributor to our Wally Wood and Gray Morrow blogs.
The pair captures the spirit of the TV version of Honey quite well without outright imitation. The story has a Hollywood background and reminds me a bit of Mike Barr's MAZE AGENCY--with its fair-play mysteries and oh-so-clean artwork-- with more than a dash of Mark Evanier's CROSSFIRE thrown in. 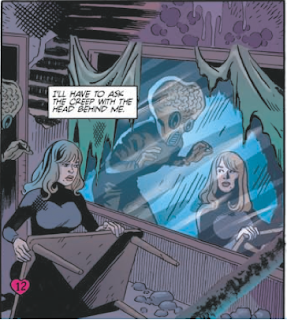 Sutton as an artist is a talented industry veteran who's flown pretty much under the radar for years but he's also a comics fan and pop culture historian of the highest caliber and recognizably references the classic Wally Wood sci-fi style in the space movie scenes. His look is, as I said above, clean and easy to follow as opposed to, say, last week's KIRBY--GENESIS # 0 which had me thoroughly lost. Fancy art has a place in comics and elsewhere, but without storytelling, it really isn't comics, is it?
Yes, this is the second issue of a 4 issue story arc. While you're at your comic shop, there's a good chance they have a copy of the previous issue lying around or else can get you a copy. The good news is that there are two more issues after this one from this team. Actually, HONEY WEST by Elaine Lee and Ronn Sutton IS the good news. Buy it, read it and I think you'll enjoy it.
Many thanks to Ronn for the advance look!
UPDATE--Elaine Lee writes to say: if people can't find the first issue in their local shop, they can get Honey directly from the Moonstone site at:http://www.facebook.com/l/def40FI3n51Y5Vx7966R7MZWtGw/moonstonebooks.com/shop/category.aspx?catid=31
Posted by Booksteve at 8:21 PM