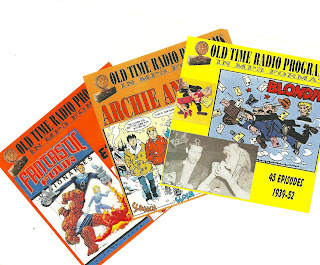 I really don't recall when I realized it but at some point I came to the conclusion that Friday the 13th could bring good luck rather than bad simply by maintaining a positive attitude. Mind over matter if you will. The power of positive thinking in action. And it worked!
Since then the oddest good luck things have happened as long as I remained optimistic. One year I won a hundred dollars on the Lottery. One year I got a promotion. One year I actually got a raise...just because. The letter in my paycheck said they realized they had been underpaying me for years so they gave me backpay and a raise! Seriously.
This year was kind of similar. At the beginning of the week we had fourteen dollars in our bank account and we were at least a month behind on all of our bills including the mortgage. My wife got a check on Wednesday and I spent the next day negotiating with creditors to dole out what little we had. We had already decided not to go to the Cincinnati Old-Time Radio Convention this year, even though we hadn't missed it in 23 years and there were rumors (again) that this would be the final year.
And then on Thursday afternoon we got a windfall. It wasn't entirely unexpected but it was three months ahead of schedule and much more than we had been been expecting! Suddenly we were able to catch up on all the bills. Suddenly the OTR Con was back on!
Neal Ellis and Ken Stockinger were broadcasting live from the Con on Friday morning when I decided to change my look completely. My hair had come in white from the last time I had shaved it but it was at that awkward stage where it was too short to comb and too long not to do something with. So I shaved it again. Then I decided to dye my beard. I don't mind the white haired look but I wanted something different. I was tired of looking 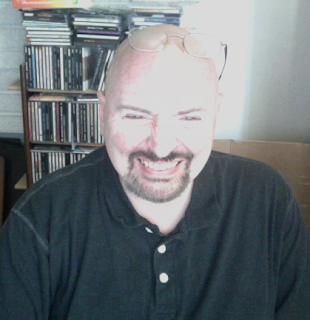 in the mirror at this depressed guy looking back at me. I wanted to see someone else in there. My face has been ruddy and broken out lately due to my health issues but the overall effect seemed to make me look more rugged. One person said I looked like a pudgy, middle-aged Hell's Angel. The final touches were to break out my rarely used fake teeth to replace the ones I lost a couple years ago and my equally rarely used bifocals.
I picked up David from school at 1:30 and--more good luck--Rene was working at the same school that day for the first time ever! Brittany Rose couldn't make it that first day. We drove straight up and even our car, worrisome to the point where I've tried to avoid driving on Interstates for several years now, was in fine condition and made it in record time.
Those few whom we had told not to expect us this year were suddenly all over us! Bob Hastings had not come this year due to last minute illness but Rosemary Rice and 93 year old Esther Geddes looked lovely as always. Not long after we got there were this year's auditions. David read but did not get cast this year. Rene received a particularly juicy part in Friday night's GUNSMOKE re-creation. As for me, even though director Don Ramlow didn't have me read for these particular roles, he cast me in the exact two parts that I wanted out of this year's shows--GUNSMOKE'S "Chester" and THE LIFE OF RILEY's "Junior." More positive thinking luck!
Friday night's performance went off without a hitch (well..two gunshots didn't work but other than that...) and Rene stole the show. I played Chester with a combination of Parley Baer's original portrayal and Gabby Hayes. Even popped my teef out for that!
Since I'm 50 pounds above my normal weight lately, I was concerned about the long day on Saturday but luckily we had no roles in the early shows and thus didn't need to be there before 3:30 for my RILEY rehearsal. Brittany Rose called, though, and said that she and fiance Thomas were coming with us so we went up around noon.
World's biggest Jack Benny fan Karen Hughes and her great and wondrous parents, Kathy and Dan were, as always, highlights of our weekend. It was particularly fun to watch Brittany and Karen as always--sisters from another mother. I spent a lot of time catching up with Martin Grams for whom I've been doing work this past year in several capacities, and picked up a free copy of his excellent new book on the Shadow which I had helped proofread some months back. Look for a full rave review soon but in the meantime, go ahead and by the book!
Had some great conversations also with Roy Bright, Rodney Bowcock, Steve and Laura Jansen (two of my all-time favorite folks! She even got to be MY sister for a change in LIFE OF RILEY!), Meredith Grainger, Chris Holm, Grant Gardner, Rick Keating and more. Was also good to see Barb and Dave Davies, Lenelle Herbert Marshall, Bob Burchett, Geoffrey Brittingham, Randy Larson and others I've known for years...and somehow managed to miss finding out their names. This was the second year for a young man named Chad who was welcomed into the family-like atmosphere of the show. Yesterday, I spent nearly an hour on-air with Neal and Ken on their live broadcast, mainly giving a well-deserved plug for Martin's Shadow book.
Since we had a little spending money after all, I even picked up the comics-related discs of radio series episodes seen above as well as a few sets of hard-to-find DVD's. Steve J even slipped me an I LOVE A MYSTERY cassette (yes, he and I both still use cassettes. What's it to ya?).
Attendance seemed to be down this year. Part of the reason for that was an unfortunate need to change the already announced dates for this year. Another reason could be the fact that WONDERFEST was yesterday in nearby Louisville and may have attracted some crossover fans.
Brittany and Thom greatly enjoyed the afternoon's production of THE WHISTLER featuring friend Karen but I missed it due to a great conversation on B Westerns. The LIFE OF RILEY script was quite amusing and everyone was on their game. My part wasn't big but hey, at my age when you continually get typecast to do teenage boy roles, who's complaining how many lines you get?
After the last show, the Awards presentations were highlighted by a surprise award to Bob Burchett himself for his 25th anniversary with this Con. He said flat out that tehre WILL be a 26th annual one next year. With the Friend of Old-Time Radio Convention in Newark disappearing after this year...Cincinnati may well become THE place to go for this type of thing.
Bob Burchett said last evening that someone described the Cincinnati Convention as a family reunion of people who aren't related (or something like that). It really is...and I'm glad we got to go yet again...thanks to that old Friday the 13th GOOD luck.
Posted by Booksteve at 3:05 PM