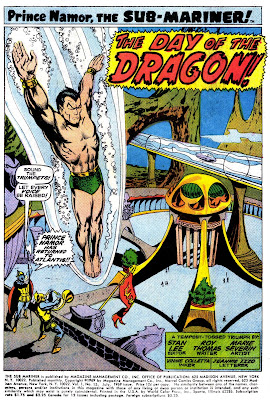 A nice rendition of our hero, here, as usual at this point by Mirthful Marie Severin. In fact, the only problem I see is that there sure aren't many people out and about in Atlantis. Since this splash was inked by the much maligned Vince Colletta, known for erasing figures in crowd scenes, one really has to wonder if perhaps there were originally hundreds of those tiny Atlanteans there to which Vinnie responded, "Oh, hell no" as he broke out his eraser. Could be just me but looks like a little Herb Trimpe here and there in this splash, also. Who knows?
Roy T continues on script with this issue spotlighting Kirby's Dragon Man, a character who would be revived in a surprising manner in FF decades later to become an intellectual babysitter of sorts!
Posted by Booksteve at 12:07 AM