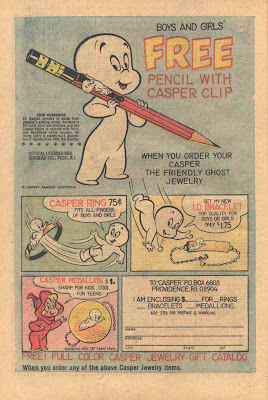 I don't remember there being a ton of Casper the Friendly Ghost merchandise in the early seventies but this ad from 1972 shows that Harvey was still in there trying. A decade earlier, in the early sixties, the Harvey comics were the first ones I ever had when my dad brought me some home from the drugstore every time he stopped there. By this point they seemed on their last legs.
Posted by Booksteve at 9:09 PM