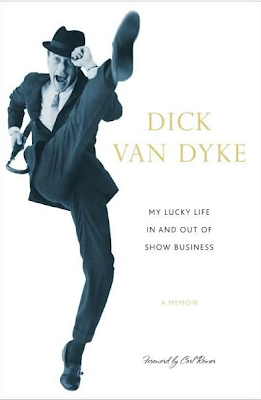 I lucked into a slightly water-damaged copy of Dick Van Dyke's new autobiography for half price. As one of my all-time favorite performers, I had to get it.
As a child, I often said that THE DICK VAN DYKE SHOW was my favorite show and it was, in fact, what made me want to be a writer when I grew up! A little later, MARY POPPINS became big in my life to the point where we still have a re-issue poster on the wall upstairs. CHITTY CHITTY BANG BANG was the film I saw on my first date (at age 10).
Dick Van Dyke comes across here as exactly who one always thought he was--a nice guy. Yes there were some issues including the alcoholism he has been open about for some time. But not one word of this book---as opposed to a couple others I've read in recent years--makes me like him any less than I always have.
Even at its dark points, it's a breezy read, more ancedotal than in-depth history. He glosses over some bits that seem like he should have dealt with to a greater degree.
Along the way, you'll read about his many friends and co-stars from Mary Tyler Moore, Rose Marie and Morey Amsterdam to Hope Lange, Andy Kaufman, Julie Andrews and Walt Disney. You'll learn about his faith and his political activism, his smoking and drinking issues, his family, his brother and, of course, his various TV series and feature films. Through it all, you'll feel like you're just sitting around chatting with an old and dear friend.
With an appropriate introduction by Carl Reiner, the accurately but awkwardly titled MY LUCKY LIFE IN AND OUT OF SHOW BUSINESS is a fun and informative read for casual or longtime fans alike. Booksteve recommends.

Posted by Booksteve at 9:24 AM