Review: The Adventures of Unemployed Man 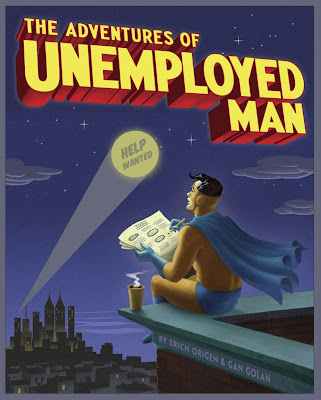 As most of you know, I AM an unemployed man. Some months ago, I received a review copy of the graphic novel, UNEMPLOYED MAN. I did a quick read-through with the intention of going through the book in more depth the next day and writing down my thoughts. The problem came when my 14 year old son read it, liked it and took it to school to show his teacher who also liked it. Then it was misplaced for a while, then forgotten for a while, then pushed aside while I dealt with my own problems with health and...well…unemployment. To be honest, I just found it hard to get that deep into the concept after having had to deal with it so long in real life. I’ve even avoided reading all the other reviews of the book.

Today, however, I finally gave UNEMPLOYED MAN its due and let me say right up front that this Little-Brown publication is one of my favorite comics-related items in recent years. (By way of full disclosure, let me also just say that two of the several artists involved in this project—Michael Netzer and Terry Beatty—have become friends of mine through the Internet).

On the surface, UNEMPLOYED MAN gives the impression of liberal propaganda done up in the style of Harvey Kurtzman’s original MAD (with some Silver Age Marvel and DC twists) for a quick cash-in satirizing the USA’s economic woes. Luckily, there’s a lot more going on here than that.

The harsh realities are all here, done up in flashy comic book colors and metaphors. You get the sudden fall from grace, the eye opening, the depression, the collections agencies, the get-rich quick schemes, the disappointing and frustrating job scams, the homelessness, the helplessness and the hopelessness.

But underneath the fatalism is an inherent optimism. Our hero just won’t give up! Originally The Ultimatum, we see him in the beginning of the story, blinded to the harsher realities of his world’s economic issues. Espousing self-help platitudes as his “super-power,” he turns out to be but a figurehead of the corporation he thought he was running. As his eyes finally start to open, he is literally kicked out into the unknown.

His sidekick (visually based on artist Terry Beatty?) turns against him, the items in his secret headquarters get repossessed, and he ends up having to deal with a whole new class of people whom previously he had looked down on. The puns, both written and visual, come fast and furiously from this point as our hero, newly christened as Unemployed Man, “champion of all who’ve lost their jobs,” sets out to help people in ways that go far beyond the “attitude adjustment” he had previously espoused.

Everyone in this world is/was some kind of hero or villain. Among the clever character names are Plan B, Kollecticus, Wonder Mother, Super Lotto, Fellowman, the White rage, Outsourcer, Alien Greenspan and the Free Marketeers. As you might surmise, whilst comics references abound, a working knowledge of the past twenty or so years of American politics will net you even more jokes, gags and puns.

The art throughout has a style very similar to that of Dave Gibbons of the seminal WATCHMEN graphic novel with Unemployed Man himself even resembling that book’s minor hero character, Captain Metropolis.

THE ADVENTURES OF UNEMPLOYED MAN reminds me in many ways of the GREAT SOCIETY comic book that came out in the mid-sixties and featured superhero caricatures of the politicians of the day in simplistic satires of then-prevalent issues. The art in that nifty little gem (as well as its spin-off, BOBMAN AND TEDDY) was by the much-maligned Tony Tallarico.

The art here, however, is completely top-notch all the way, highlighted by the return of the great Ramona Fradon! Ms. Fradon was one of the very few women artists in Golden Age comics and was an early artist on AQUAMAN. Her best-known comic book work may be on National’s sixties cult-character, METAMORPHO. She went on to take over as the longtime artist on the BRENDA STARR newspaper strip.

Rick Veitch took over Vertigo’s SWAMP THING from Steve Bissette and John Totleben, one of the great teams of their day, and made it his own, eventually even picking up the writing reigns from Alan Moore. On his own, he has published a number of bizarre but always fascinating projects including THE MAXIMORTAL.

Michael Netzer is the controversial artist who started out as one of many Neal Adams clones at Continuity Associates and has long since developed his own unique but highly adaptable style. Much of Mr. Netzer’s best work over the years has been inked by artist Joe Rubinstein who reteams with him here for some lovely sequences.

Artist Terry Beatty is probably best known for his work with longtime friend and collaborator Max Allan Collins on comics such as MS. TREE but one of my favorite projects of his was THE PHONY PAGES way back in the eighties. Up next is the RETURN TO PERDITION graphic novel. 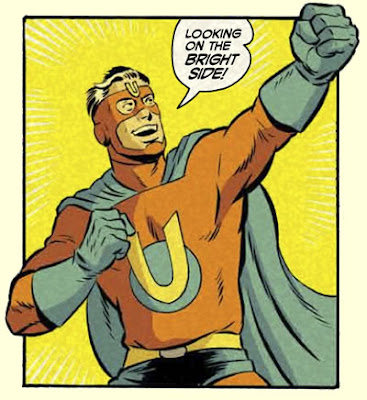 The great comics letterer Tom Orzechowski is on-hand, too, along with Clem Robins and Thomas Mauer.

That great team wouldn’t have come together at all, however, if Gan Golan and Erich Origen hadn’t created and written THE ADVENTURES OF UNEMPLOYED MAN. They are also responsible for character designs, layouts and art direction. I am not familiar with the work of either of these gentlemen but they have an amazing feel for political, social and pop culture satire. Thanks go to them, also, for getting me this copy for its long-delayed review.

If you aren’t a victim of the economic mess these days, consider yourself lucky. THE ADVENTURES OF UNEMPLOYED MAN might open up your eyes the same way it does for its title character. If you are unemployed, this book will help you laugh through some of the nightmarish issues and maybe even, as it did me, help you to understand them a bit more.

It’s hard to classify THE ADVENTURES OF UNEMPLOYED MAN. It’s a graphic novel, a parody, a satire, a lampoon, and, as I stated above, more than a bit of political propaganda. It’s clever and at times absolutely hilarious. It’s pretty but at times genuinely scary. It’s not adult in the sense of dirty words or naked ladies but it is in no way a kids’ book. It’s a sleek, almost fancy package done up to look cheap on purpose. Had to categorize but read it for yourself and call it what you will. In the end, THE ADVENTURES OF UNEMPLOYED MAN is one of my favorite comics-related projects of recent years. I think most who read my blog will like it, too.