A Week of Yaphet Kotto: Live And Let Die 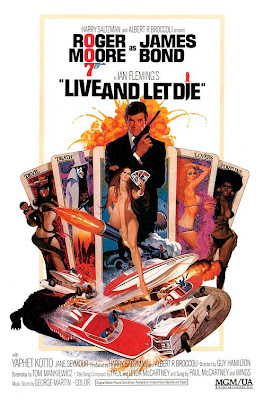 THE STING, THE WICKER MAN, ENTER THE DRAGON, THE EXORCIST…1973 was a very good year for movies. One of the best of my lifetime. A number of my all-time favorite films were released that year and one of those was LIVE AND LET DIE.

I was 14 in ‘73 but the only James Bond movie I had ever seen was 1971’s DIAMONDS ARE FOREVER, Sean Connery’s one-off return to the 007 role after skipping the previous film. While the Connery film was on-screen, TV actor Roger Moore—up until then best known as THE SAINT on TV in the mid-sixties, was producing and starring in a fondly remembered buddy series with Tony Curtis entitled THE PERSUADERS.

Meanwhile, African-American actor Yaphet Kotto, trained at the fabled Actors’ Studio, had been appearing in mostly small roles on television series and in films for nearly a decade. While Bond rescued Jimmy Dean from Blofeld in theaters, Yaphet was backing up Bill Cosby in a well received but now forgotten all-black western movie entitled MAN AND BOY. Sean Connery’s ongoing dissatisfaction with the role that made his career would soon bring Moore and Kotto together.

Roger Moore had twice been considered for the Bond role, most recently when Connery had originally left after 1967’s YOU ONLY LIVE TWICE but he was tied up at the time. For reasons best not to get into here, George Lazenby—who had gotten the job that time—was no longer a viable option. UA and Producer Cubby Broccoli reportedly wanted actor (and future Ambassador to Mexico) John Gavin as Bond but Gavin was American. Co-producer Harry Saltzman continued to push for Englishman Moore. Although the studio wasn’t thrilled with the choice, eventually everyone came around to what, in retrospect, was the best possible casting: Roger Moore would be James Bond, 007, in Ian Fleming’s LIVE AND LET DIE.

Yaphet Kotto, making big screen inroads due to the growing popularity of the blaxploitation genre, was shooting ACROSS 110TH STREET when he was cast in the role of the Bond movie’s antagonist, Mr. Big. 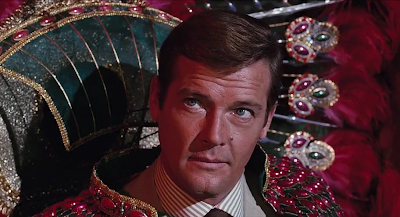 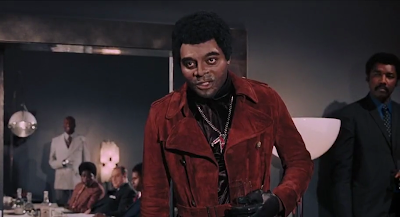 Like most of the 007 movies, LIVE AND LET DIE, the film, bears little resemblance to Fleming’s original book beyond the accent on African-American crime. In fact, the film’s trendy seventies drug smuggling was originally diamond smuggling.

LIVE AND LET DIE began shooting in 1972 and was, itself, considered a bit of a blaxploitation film. Besides Yaphet, actress Gloria Hendry (who sadly seemed to be unable to read the simplest lines) appeared as the first black Bond Girl. Many other actors of color appear also, another first for the Bond films. The most prominent, though were Trinidad’s Geoffrey Holder, best known at the time for a series of memorable 7-UP Uncola TV ads and big Julius Harris, a welcome presence in all types of films and on television throughout the decade. Holder played the Voodoo priest, Baron Samedi, while Harris took on the role of Mr. Big’s grinning, sadistic henchman, Tee Hee Johnson.

After a brief introduction to Moore’s new brand of suave, sophisticated Bond, the audience is treated to one of THE classic title sequences and the now-iconic theme by Paul McCartney and Wings. The song would be a huge hit over the years in Macca’s concert performances, always played with appropriate Bondian flourish utilizing lasers, fireworks and explosions.

The basic plot of the film brings Bond to the US—New Orleans and Harlem— as well as to the islands in an uncharacteristic case in which he is attempting to stop drug dealers as opposed to spies, assassins or would-be world dictators. Early on, we meet Dr Kananga, ruler of the island nation of San Monique. 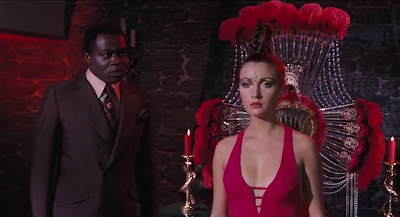 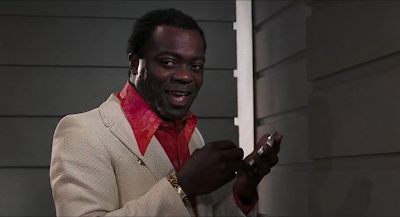 Soon enough, Bond also meets Mr. Big, a stereotypical New York black drug dealer/gangster of the period…with ludicrously obvious fake makeup…as well as actress Jane Seymour, the future DR. QUINN. MEDICINE WOMAN, as Solitaire, whose gift of second sight through the tarot controls Mr. Big’s criminal actions.Watching Bond as a fish out of water offers a few opportunities for dramatic tension and even more for the type of leering humor that will become a hallmark of the Moore films.

Ultimately, Mr. Big is revealed to be Dr. Kananga himself and that’s when Yaphet Kotto gets to shine. No longer purely a seventies stereotype, he is shown as an erudite, sophisticated, manipulative menace more than worthy of the cat and mouse game he plays with our hero throughout the last half of the picture.

When LIVE AND LET DIE first came out, it was accompanied by a now long out-of-print book entitled ROGER MOORE’S JAMES BOND DIARY. Unlike many such ghosted promo tie-ins, this one is long enough, chatty enough and detailed enough to give every impression that the star himself really did write it! It’s interesting to note Moore’s reactions to Kotto throughout shooting.

Upon returning to the New Orleans set early on after a sick day in bed back at the hotel, Moore writes, “On my return I came face to face for the first time with the villain of our piece, Yaphet Kotto, a mountain of a man; all six feet four and muscled two hundred and fifty pounds of him was waiting to meet me at the bar. I felt a bit of a beanpole by comparison. As Mr. Big, he has no scenes in New Orleans but came down for make-up tests.”

At one point, he punched the air with a black power salute at a controversial photo shoot with Moore and Jane Seymour, endearing him to some cast and crew members but making others a bit uneasy. Once they finally started shooting together weeks later, the English Roger described his American antagonist as “…an actor of extraordinary depth and power.”

Detailing one of their first scenes together, Roger writes, “Yaphet was magnificent, pulling all sorts of tricks out of his bag that he hadn’t shown in rehearsal, and I was so open-mouthed at his performance, I did what I dreaded I would do and blew my tag line.” Any tension on set was broken as Moore began to play practical jokes on the more serious Kotto.

In the end, after leading everyone to believe he couldn’t swim and would therefore have to be doubled in the movie’s climactic underwater scene, Yaphet Kotto pulled one last surprise on the cast and crew when he did the scene himself after all, leading up to the literal explosion of Kananga! 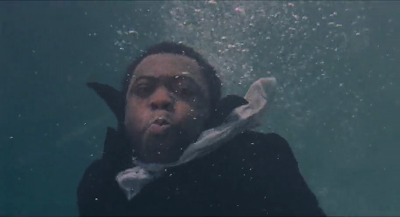 LIVE AND LET DIE seems more a product of its time than some James Bond films what with the racial stereotyping and political incorrectness but taken in context, it remains my favorite 007 adventure. With its classic boat chase, multiple great villains, memorable score, a far less self-indulgent Moore than we would see later on and, perhaps best of all, the very first time I saw Yaphet Kotto, a man whose name on a project from then on would be a guarantee of quality to me!

Thank you for all of your years of fine and enjoyable performances, sir! They have been and most certainly will remain greatly appreciated by film buffs and fans alike.

For more on Yaphet Kotto, check out the week-long blog celebration of this under-rated actor at the blogs below! Tell 'em booksteve sent ya!

THURSDAY Nov. 18th
Mondo 70 - Drum
B Movies and Beyond - The Monkey Hu$tle
Illogical Contraption - Eye of the Tiger

SATURDAY Nov. 20th
Breakfast In the Ruins - Bone
Lost Video Archive - The Park Is Mine