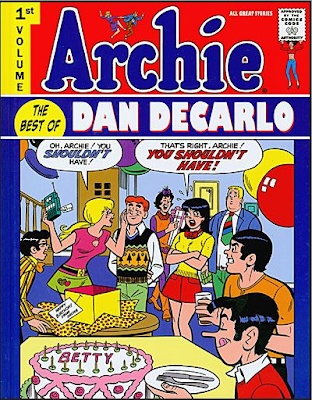 In case you haven't noticed--and arguably in spite of all logic--the 21st Century is a great time to be an Archie Comics fan. Along with Marvel and DC, Archie is the only US comic book company to have weathered the twists and turns of the market for seven straight decades and even now the company's future looks bright!

With newsmaking stories such as Archie's wedding, new titles aimed at older readers, cell phone apps, bookfairs for younger kids and the controversial introduction of Riverdale's first gay character, the company is certainly looking ahead but they're also looking back at their legacy. Recently IDW released an unprecedented volume collecting Bob Montana's original ARCHIE newspaper strips and still forthcoming is Craig Yoe's definitive history of Archie Comics which promises to be worth the wait (and I have inside information on THAT score!). In the meantime, IDW is quietly releasing a number of volumes celebrating juts a few of the classic Archie artists. First up, naturally, is Dan DeCarlo. Thanks to IDW, I have a review copy of ARCHIE: THE BEST OF DAN DECARLO, volume one on the man that most fans still consider to be THE Archie artist.

Dan DeCarlo had worked at Timely and Atlas in the fifties as the postwar Archie comics settled comfortably into their family-friendly niche while other companies exploited horror, westerns and romances. In fact, Dan worked on some of Timely's romances or at least their fringe titles like SHERRY THE SHOWGIRL and MILLIE THE MODEL. He also did a number of humor strips with Stan Lee both for comics as well as for newspapers. He was drawing in his distinctive style almost from the beginning. Meanwhile, the Archie artists--Harry Lucey, Bill Vigoda and the rest of that mostly anonymous crew--were building on Bob Montana's original style for Archie characters and coming up with a style very similar to that which DeCarlo was already doing!

IDW's volume begins in the late fifties when Dan has just arrived at Archie after Marvel looked to be finally going under (Who knew?). Since most of his early work was on BETTY & VERONICA stories, that's what you find here: At least one representative story of Archie's girlfriends from every year between 1958 and 1969 (oddly missing 1967--an off year?). There's no introduction so I have no real concept of what criteria were used for choosing a story for inclusion. I will say, however, that every single story here is a gem! With the majority written by Archie's most prolific writer, Frank Doyle (along with one by George Gladir), there is consistent characterization and a most enjoyably amusing sense of gag timing. Betty and Veronica are, of course, both best friends and rivals, opposites and yet in some ways doppelgangers. They both want Archie who appears here mostly as a supporting character. Jughead and particularly Reggie have some good moments, also.

Contrary to popular belief, these iconic characters and their stories aren't just for kids. They aren't just suitable for stroking one's nostalgia either. If you've never in your life picked up an Archie comic book but you have a sense of humor, you will like this book. The stories are genuinely funny and the art is legitimately amazing!

In fact, speaking of DeCarlo's art, it is a revelation here. I am quite familiar with his earlier work and have long sonic believed his Archie work to simply be more of the same but it is not. As seen in this volume's stunning reproduction, DeCarlo's distinct use of thick and thin lines to characterize faces is a joy to behold. The girls come across as much sexier than they do in the modern comics and yet with seemingly little effort on the artist's part, as though it was all just naturally flowing from his pencil. Credit must also be given to DeCarlo's longtime inker Rudy Lapick whose inks grace literally every single one of the stories herein.

The book's design is nifty and fun also, looking in size and thickness like nothing more or less than a big old hardcover comic book--complete with the Comics Code seal on the upper right hand corner. In comparing with a few of the original comics I have, the color re-creations are faithful to the original but the better reproduction brings out more in this version so they look much better. In fact, my only real problem with the book's design is the double contents page, printed on a lovely blue background with pop art color dots and nearly impossible to read tiny white text. Once you're on to the stories, however, there are absolutely no problems.

This is volume one in the Dan DeCarlo Archie series. Since Dan was THE image of Archie for more than four decades, there will be more if this sells. So what are you waiting for? Buy it already! Like I said, it's a great time to be an Archie fan. There's a Stan Goldberg volume on its way…and then Craig Yoe's big Archie volume…and then a whole collection of ARCHIE'S MADHOUSE. Who knows what after that? Great stuff!

Posted by Booksteve at 4:39 PM