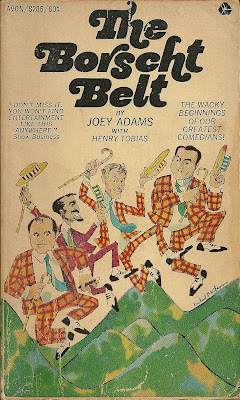 Once again it's been a while since we just randomly pulled a book off the shelves here at the Library so today I did just that.
THE BORSCHT BELT is a fun and informative 1966 book by prolific author and comic Joey Adams (the late husband of New York gossip columnist, Cindy Adams). Wikipedia defines "Borscht Belt" as "...a colloquial term for the mostly defunct summer resorts of the Catskill Mountains in parts of Sullivan, Orange and Ulster Counties in upstate New York that were a popular vacation spot for New York City Jews from the 1920s through the 1960s."
Those resorts used to be a training ground for comics on the rise as well as comedians on their way down. The jokes were corny and ethnic and the audiences were appreciative.
Adams (with co-author Henry Tobias) chronicles his own experiences there as well as those of many others who went on to become beloved American icons in nightclubs and on TV. Some of those covered include Martin and Lewis, Danny Thomas, Milton Berle, Phil Silvers and Danny Kaye. Some of the most interesting sections of the book, however, deal with the ones that no one remembers at all today!
In spite of the book's cover making it look as though it's all about "the wacky beginnings of our greatest comedians," THE BORSCHT BELT is more ambitious than that, detailing instead a place and an atmosphere that was unique to its time. It's as much about minorities as it is comics, as much about the business of entertainment as it is the stars and as much about real people as it is celebrities. In other words, it's a better book than it tries to be! If you ever see it, I recommend it to students of history in general as much as to students of show biz.
Posted by Booksteve at 1:24 PM