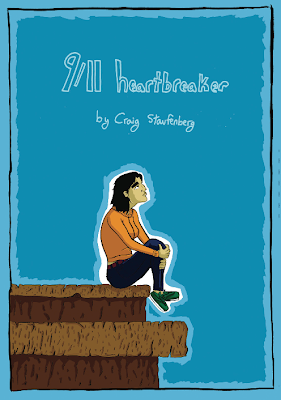 I admire Indy comics but they aren't really my "thing," y'know? Recently though, I was sent a review copy of Craig Staufenberg's 9/11 HEARTBREAKER. I'll admit that I kept putting off reading it as 9/11 was such a heavy subject and I've had a lot on my plate lately. Eventually, however, I read it...twice..and I think you should, too.
9/11 HEARTBREAKER isn't even about 9/11...exactly. It's about memory and perception and perspective. It's about connections and ties between people and between people and events. We know little about our narrator--who is female so it is not completely autobiographical in the sense of so many Indy projects in the tradition of Justin Green's pioneering BINKY BROWN MEETS THE HOLY VIRGIN MARY.
In fact, to me, it is not a graphic novel at all. It is a short film. Every "shot" is carefully planned and executed. I can "hear" the narrator telling her story in a slightly sad monotone with distant background noises of trains and karaoke. It's not so much a story mind you as it is musings-- but deep musings mixed with everyday longing as she tries to come to grips with tragedy but also with hope and history.
It's actually hard for me to put into words how well I think this would work as a film but it works, too, as a graphic novel. At 28 pages, it's not really short. Everything you need is present. If you started earlier or went on best the point it stops, you'd have a different book. If there were more details given about the people in the book or ore movement in their various relationships...again you'd have a different book. And I don't want a different book! This one works fine just as is. It's deep and literary without becoming precocious or pretentious. It's never easy for a creative person to know where to leave things but Craig has shown great instinct and restraint. He got it right!
The art appears computer generated but it's still better than some Indy books I've seen. The writing is excellent and the "directing" is, to me, the best part of all. I think I'll go rewind it and watch...err...read it again. 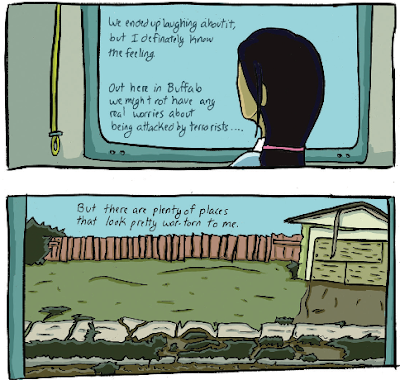