Movies That Fell Through the Cracks # 63 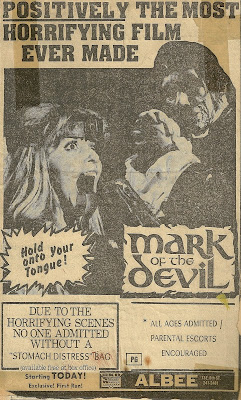 Just how different was the ratings system of the early seventies from the ratings system we have today? Well, consider the fact that MARK OF THE DEVIL, as seen in this original opening day ad, was rated PG even as it was being referred to as "Positively the most horrifying film ever made." In fact, soon enough, its distributor would bill it as "the first film rated 'V' for violence."

If I'm remembering correctly, MARK OF THE DEVIL, with its gimmick of free barf bags (which turned up all over my school for the next week or so) opened in this country in 1972 but it had actually been made in 1970, a West German production.

To horror fans, it's hardly a lost film but it has kind of fallen by the wayside in recent decades. The most interesting thing about it, as anyone who saw it will know, is that in spite of a few memorably violent torture scenes (apparently STILL censored on some video and DVD releases according to IMDB), MARK OF THE DEVIL really is NOT just a torture-porn exploitation film. In fact it has as much or more in common with Vincent Price's now critically praised WITCHFINDER GENERAL (aka THE CONQUERER WORM) than it does SAW.

MARK OF THE DEVIL is, like Price's film, a story of the Witch Hunts of old. In this case, Herbert Lom is the protagonist, a corrupt official whose imperfections come to light to his assistant, played by Udo Kier. Other familiar cast names to genre buffs are Reggie Nalder and Gaby Fuchs.

Lom, of course, is best remembered as the put-upon Chief Inspector Dreyfus in Peter Sellers' PINK PANTHER films but he lists a wide variety of horror film credits including the Amicus anthology, ASYLUM, the Phantom in the 1962 Hammer version of THE PHANTOM OF THE OPERA and Van Helsing in Jess Franco's COUNT DRACULA.

Udo Kier, is, of course, the continental cult film star of both ANDY WARHOL'S FRANKENSTEIN and ANDY WARHOL'S DRACULA as well as equally adult attractions such as SPERMULA, THE STORY OF O, Dario Argento's SUSPIRIA and, more recently, cartoon voices on THE BATMAN and JUSTICE LEAGUE.

Reggie Nalder was the scarred character actor best known as the killer in Hitchcock's second version of THE MAN WHO KNEW TOO MUCH, the vampire in Stephen King's SALEM'S LOT mini-series and, once again, Van Helsing, in the otherwise all-porn star cast of 1979's DRACULA SUCKS. He also appeared in scores of episodic television series in the US from PETER GUNN to the original BATTLESTAR GALACTICA over two decades.

Others in the cast included softcore sexploitation actress Gaby Fuchs, the unfortunately named Hebert Fux who went on to become a member of the Austrian Parliament and Adrian Hoven, one of the film's co-writers, in a small role. The other co-writer--as well as director--was Michael Armstrong who wrote a number of the nudge-nude, wink-wink British nudie comedies of the seventies.

So if you get a chance to see MARK OF THE DEVIL, don't turn it down OR accept it solely because of its marketing all these years. It's well acted and not horribly written with a surprising number of familiar faces to horror film fans. But…yeah…that tongue DOES come out so I WOULD keep a barf bag handy…just in case.

Posted by Booksteve at 7:14 PM