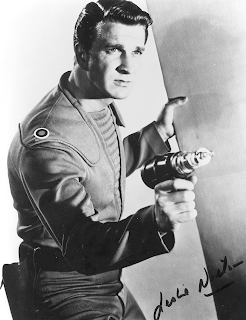 Seriously...was there ever anyone with a more satisfying second act than Leslie Nielsen? Memorable as the starship captain of 1956's FORBIDDEN PLANET and in 1960 as Disney's SWAMP FOX, his would be a familiar face (topped by its prematurely white hair) to sixties and early seventies television viewers as an authority figure on scores of shows--a doctor, a lawyer, a detective, an executive. He was a hunter in a memorable episode of NIGHT GALLERY and Patrick McGoohan's victim in my all-time favorite episode of COLUMBO. The one thing that characterized Leslie Nielsen's performances more than anything else was his seriousness. He was serious to the point of being stodgy!
Then, at age 55, at a time when he could have chosen to retire and look back over 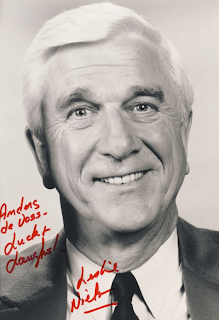 a good, solid acting career, came AIRPLANE. Part of the humor of the now legendary scattershot comedy was to cast Nielsen along with other stodgy actors such as Robert Stack,Peter Graves and Lloyd Bridges and have them do flat out silly things. It worked. The film did much for the careers of all of those men but the others simply returned to their serious roles for the most part including Stack's gravitas on TV's UNSOLVED MYSTERIES and Graves hosting BIOGRAPHY.
Leslie Nielsen, on the other hand, grabbed a whoopie cushion and away he ran, never looking back. Eventually it got to a point where he could not have been taken seriously in another role ever again. From that point on, whatever the role, whatever the project, he was Leslie Nielsen!
TV's brilliant POLICE SQUAD! led to the NAKED GUN films which led to lesser material like MISTER MAGOO, REPOSSESSED and even a turn as a ridiculously silly Count Dracula! By all accounts a funny man who made a lot of money when he finally let people know that. Thanks for BOTH of your careers, sir. We'll miss you.
Posted by Booksteve at 8:52 AM