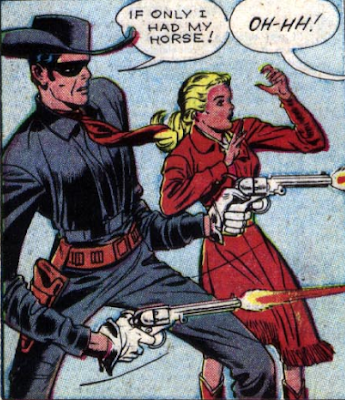 I have a friend who delights in pointing out the bizarre poses and anatomical stretches in characters drawn by Jack Kirby. This would be a good example of that. This skinny fella is the Atlas cowboy hero known as the Black Rider...although here he looks more like Plastic Man with guns. Those guns, by the way, appear nearly as big as the guy's head and the one in the right hand seems pointed sideways! His scarf looks like it may be somehow tied to that poor woman's hair. His arms? Look as though they'd hang down well below his knees. Around this time Kirby had a habit of drawing all of his cowboys bow-legged, also, and the Rider here is no exception. I guess it is a good thing he went on to create the Silver Surfer and the New Gods and plant the seeds for pop culture as we know it today or else, based on this, we'd be looking at Jack as another Fletcher Hanks by now!
Posted by Booksteve at 5:00 AM