Yet Another Cool Timely Ad 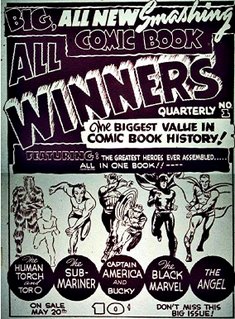 I know, I know. Looks like the Library is becoming Ads-R-Us lately but here's another one advertising ALL-WINNERS COMICS, the 1940s' anthology that eventually would bring the public the two appearances of Marvel's only Golden Age super team, the All-Winners Squad. Black Marvel wouldn't make the cut but the Angel ran for years, more a ripoff of the Saint than a super hero at times. Still, I wonder why he wasn't a member? Anyway, hopefully, I'll be through my sleep deprivation period soon. We're way overdue for another movie that fell though the cracks or, hey, maybe some Linda Blair! In the meantime, though, enjoy this rare ad.
Posted by Booksteve at 8:01 PM