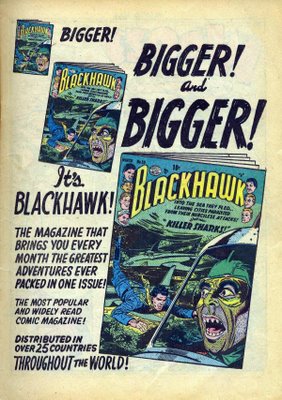 I first discovered BLACKHAWK in my barber's shop as a kid. He always had a bunch of coverless BLACKHAWK comics going all the way back to the mid-fifties issues and right up to the red-jacketed sixties versions. I confess a weakness for BLACKHAWK in spite of the repetitive plots and general inanity of the later ones. For many years I collected the title in all of its forms. After a fairly dreadful seventies revival, the whole series was redeemed in the eighties in a long and amazingly good run by Mark Evanier (who would want me to remind you that tomorrow is NATIONAL GORILLA SUIT DAY) and artist Dan Spiegle only to be dragged way down into the gutter by Howard Chaykin in a nonetheless popular miniseries (that featured DC's first blowjob scene) which later spawned a less popular regular series. Along the way there was a movie serial (with Kirk Alyn), a short-lived radio version and an unusual novel by the equally unusual William Rotsler (who deserves a whole blog piece unto himself). Seen here is an early 1950's ad from when the title was still being published by Quality that alleges that BLACKHAWK was at that time the "most popular and widely read comic magazine" of them all! Is this true?
Posted by Booksteve at 7:13 PM