The Human Bomb and his Quality Sidekick 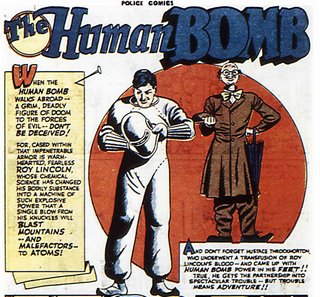 That's Quality, the publisher, not "quality" as in "better than those goofy DC sidekicks." I never actually cared for the Human Bomb, a guy who was just generally explosive and wore a type of Haz-Mat suit to fight crime. He was, however, popular enough to run for years in POLICE COMICS (Plastic Man's home turf) back in the early to mid forties. Like DC (which eventually bought the Quality characters), the company had a thing for comic sidekicks, Plas' pal Woozy Winks being actually one of the best. The Bomb, however, had one Hustace Throckmorton, the man with the explosive feet! Like I said, not a big Bomb fan myself. If you're intrigued however, here's a link to the character's Wikipedia entry:Human Bomb - Wikipedia, the free encyclopedia
Posted by Booksteve at 8:19 AM