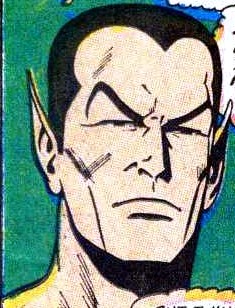 There's an early issue of Marvel's parody comic NOT BRAND ECCH in which the Sunk-Mariner takes a job as a pointy-eared alien science officer on a sci-fi TV series.

Hmmm...wonder if that might have been inspired by this contemporary TALES TO ASTONISH rendering of the real Sub-Mariner by Dandy Dan Adkins looking for all the world like a certain Vulcan.
Posted by Booksteve at 4:31 AM