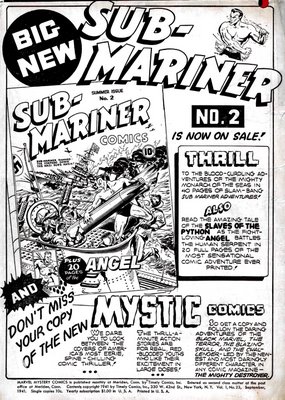 Here's yet another Timely ad, this one for the second issue of SUB-MARINER from the early 1940's. Note, though, that even here, in the midst of Namor's ad, somebody (Stan?) sneaks in a plug for MYSTIC COMICS featuring (as we noted earlier) THE MIGHTY DESTROYER, herein described as
"the most daringly different character in any comic magazine." Yeah. Different because he was a walking fashion faux pas.
Posted by Booksteve at 8:26 PM