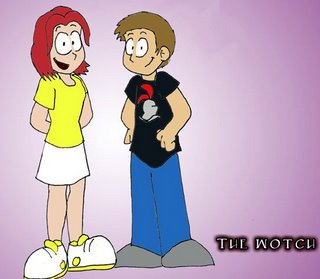 Online comic strips, unlike online columnists, usually aren’t that good. Amateurish is a kind word to describe many of them. An exception to this, introduced to me recently by my son Bookdave, is THE WOTCH. A wotch, as we quickly learn, is a type of witch. In this case, Anne, an ordinary teenage girl based loosely on Willow from BUFFY THE VAMPIRE SLAYER who is still learning to use her powers. We follow the strip’s joke-a-day format as two high school boys make the acquaintance of the new student, then later meet her big brother (who likes to relax by having Anne turn him into a little girl!) and other students. Then we drift into an actual storyline in which Anne and friends turn into comic book superheroes. A later storyline has Anne having to deal with duplicates of herself, each individual one made up of a single facet of her personality. While all of this is going on, we are subtly introduced to a back-story of a mad villain who will stop at nothing to gain the powers of the wotch!
Begun in 2003 and still being done today (I think. I’m nowhere near up to date with it yet), THE WOTCH is presented in a Sunday strip format with better than expected computer art. The character layouts and expressions give a life to the story that it might not have had otherwise. Rife with pop culture references to comics, video games and television, the dialogue is consistently amusing and well-written and you quickly learn to really like the characters. Go to The Wotch and if you like pop stuff, I can pretty much guarantee you’ll have fun watching THE WOTCH!
Posted by Booksteve at 5:59 PM