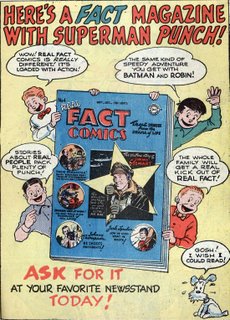 Running for 21 issues beginning in 1946, DC's REAL FACT COMICS was an unusual mag in that it literally offered true life stories rather than long underwear heroes in its pages. Movie stars, sports stars and just ordinary people were given thecomic strip profile treatment. Issue # 5 even offered the supposedly true story (although actually wildly fictionized!) of Bob Kane and his creation of BATMAN. Essentially an anthology title, it ran into the same trouble that most anthologies encounter--maintaining an audience when you have no regular characters.
Posted by Booksteve at 8:27 PM