Movies That Fell Through the Cracks # 21 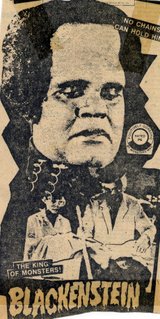 BLACKENSTEIN followed BLACULA at the box offices in 1973 and, in fact, had once had the great William Marshall's name attached to it. By the time it came out however, the biggest name in the film was John Hart. Himself a trivia question, Hart was the actor who replaced Clayton Moore temporarily as the LONE RANGER on '50's TV when Moore was told that anyone could wear the mask. Turns out that wasn't true. Oh, Hart was stalwart enough but Moore had something special about him. Hart would return to the role briefly in the legendarily bad THE PHYNX, made just a few years prior to BLACKENSTEIN. Basically, you have this African-American gentleman who is injured in Viet Nam and is revived through science to become a living monster! Kenneth Strickfaden's original FRANKENSTEIN electrical equipment is trotted out yet again (as it was for several films of the era including DRACULA VS. FRANKENSTEIN). The monster is played by one Joe De Sue, of which this is his only listed credit. In fact, with the exception of Andrea King whose career went back to the early 1940's, this was the only listed credit of most of the folks involved. The director, William Levey, went on to direct that classic of demented cinema, 1977's THE HAPPY HOOKER GOES TO WASHINGTON, starring Joey Heatherton, George Hamilton and my pal from the radio conventions, Will Hutchins.
Posted by Booksteve at 8:42 PM