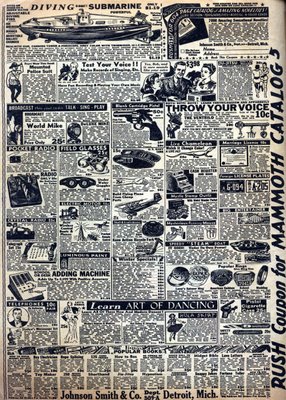 It’s easy to make fun of these old Johnson Smith mail order ads (this one from 1941) with their teeny-tiny type and their outlandish products but let’s take a closer look. I think these guys were onto something!
First of all, their Ju-Jitsu course was clearly designed to foster an interest in learning martial arts some 32 years before Bruce Lee had every kid in America taking Karate lessons.
The blank cartridge pistol is labeled as "Fine for Protection," presaging the concealed carry movement by decades.
"Broadcast through your radio! Talk! Sing! Play!" says one ad. You know, like you do on YouTube!
Personal telephones were 10 cents a pair back then and who amongst us doesn’t have cell phones today (at maybe 10 cents a minute but that’s progress!)?
That adding machine adds up to 9999 with positive accuracy. Beyond that apparently it’s anybody’s guess. Still, I got my first calculator in my sophomore year of high school 32 years ago now…but 35 years AFTER this ad!
A personal telegraph? Hey, I don’t know about you but I’ve already received three text messages on my cell phone this morning. What’s the difference?
So you see, the folks at the much maligned Johnson Smith seem to have been the grandfathers of today’s greatest achievements! Who knows, maybe REAL X-Ray Spex are just around the corner!
What’s that? Oh, yeah…the mysterious running mouse? The live chameleon? The Mounted Police Suit? Okay, okay, maybe it really was all a bunch of rubbish! Never mind!
Posted by Booksteve at 8:21 AM