A Year at the Top 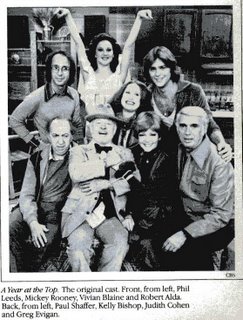 A major television flop from the up until then golden touch of Executive Producer Norman Lear, A YEAR AT THE TOP came and went almost simultaneously in 1977...and that was after recasting and extensive reshoots on the pilot which delayed its airing for some months. The show starred musician Paul Shaffer (then of SNL and soonishly to begin a 25 year plus partnership with David Letterman) and handsome Greg Evigan soon to star on BJ AND THE BEAR (arguably the gayest TV series title of them all if you think about it). It was, however, originally supposed to star MGM legend Mickey Rooney (soon to revitalize his career in Broadway's SUGAR BABIES). Rooney's character, seen here in this early publicity still, was a casualty of the changes. The premise dealt with two guys who sold their soul to the devil's son in exchange for a year at the top in the music industry and immediately regretted it. Hilarity, as they say, ensued...or so somebody thought it would anyway. In spite of big publicity and even controversy, no one watched. No one cared.
Posted by Booksteve at 9:05 PM