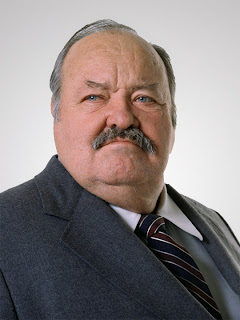 # 5-William Conrad: Perhaps best remembered as "the fat detective" from the era when all TV detectives had to be pigeonholed in some way, Louisville, Kentucky native William Conrad was a writer, actor, producer and director and perhaps second only to Orson Welles in the diverse collection of characters he created over the radio airwaves. Conrad's best known role on radio was that of Marshal Matt Dillon on GUNSMOKE for nine years, a role for which he was deemed unfit on TV, being short and overweight.

Conrad's mellifluous voice can also be heard intoning the narration for a number of movies, TV series and documentaries through the years, most notably--if perhaps unbelievably--the adventures of ROCKY & BULLWINKLE! After his TV success as CANNON, he went on to star in JAKE & THE FAT MAN and NERO WOLFE, both of which cast him to type. Known privately for his naughty sense of humor, there are some pretty funny TV blooper reels out there with him as well. He died in 1994. 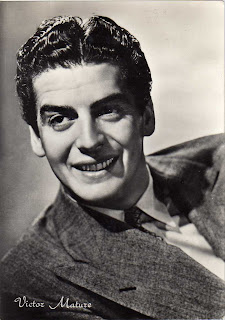 # 4-Victor Mature: Another Louisville native, Victor Mature was known throughout his Hollywood career for his hunkiness, beginning right from his first starring role as a caveman in ONE MILLION YEARS BC in 1940. After that he starred in a long line of diverse films from westerns like MY DARLING CLEMENTINE to a lot of musicals. He is probably best remembered for his Biblical and similarly-styled epics, most of which required him to be shirtless a good deal of the time. It was SAMSON AND DELILAH that reportedly inspired Groucho Marx's famous statement that he didn't like a picture where the leading man's chest was bigger than the leading lady's.

He was not above kidding his own image in such later films as 1966's AFTER THE FOX and the Monkees cult film HEAD in '68 but the actor made only a handful of film appearances after those. He passed at the age of 86 in 1999. 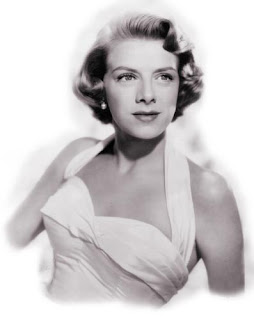 # 3-Rosemary Clooney: Rosemary Clooney, the pride of Maysville, Kentucky, had a film career of some note but it was eclipsed by both the drama of her personal life and her success as a jazz, big band and pop singer. Originally a double act on radio with her sister Betty in the mid-forties, her solo career moved her swiftly to the top of the pop charts where she was then whisked away to Hollywood. Though her acting career in films and TV wasn't extensive, it did include one of the most beloved movies of all time, the holiday classic, WHITE CHRISTMAS, with Bing Crosby, Danny Kaye and Vera-Ellen (also a local native from just across the river in Ohio).

After two much publicized marriages to actor Jose Ferrer, her personal problems got the best of her and Rosemary's career was sidetracked for several years by a nervous breakdown. Eventually, she returned, at the top of her game, and continued touring, recording and acting for the rest of her days, which ended in 2002. 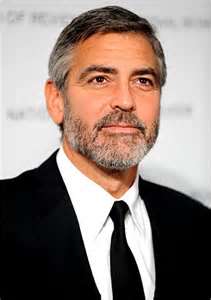 # 2-George Clooney: Talent running in the family, Lexington, Kentucky's George Clooney, Rosemary's nephew, is just about the hottest thing in Hollywood these days. From his humble beginnings working in the shoe department at a local Northern Kentucky department store (a job he beat me out of) he entered show biz by driving his Aunt's tour bus. After some small success on TV, he hit it big with ER and parlayed that into small films and then bigger films and then ultimately blockbusters, eventually becoming the producer/director/actor he is today, having just shared the Oscar for Best Picture this past evening for ARGO.

Along the way, George Clooney has demonstrated himself to be an extremely class act as well, the handsome modern equivalent of Cary Grant, but determined to use his position and fame to make a positive difference in the world away from the Silver Screen. 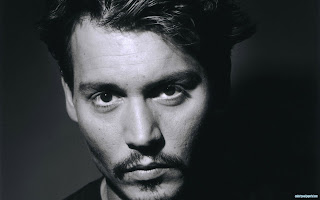 # 1-Who could be bigger than George Clooney? Why, Johnny Depp, of course. Born in Owensboro, Kentucky, Depp began acting in small roles in the early eighties before becoming the proverbial overnight success on the TV series 21 JUMP STREET. Known for a long line of well-crafted film personas, Depp has been Edward Scissorhands, Ed Wood, Willy Wonka, Hunter S. Thompson, Sweeney Todd, Captain Jack Sparrow, Ichabod Crane, Barnabas Collins and, coming soon, Tonto.
Long associated with Producer/director Tim Burton, Depp has demonstrated his chameleon-like tendencies on outlandish characters so often that ordinary acting roles seem somehow beneath him now. No doubt, his movie appearances will continue to thrill and surprise audiences from Kentucky and around the world for many, many years yet to come.
Posted by Booksteve at 8:04 PM