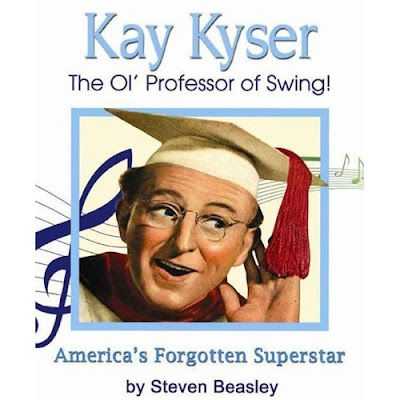 A while back, I wrote several posts on a couple of my blogs about the great swing bandleader and comedian, Kay Kyser. Author Steven Beasley got wind of the posts and was kind enough to get me a copy of his biography of The Ol' Professor!

I first discovered swing music in the late seventies on a local radio show called WHEN SWING WAS KING. I heard some Kay Kyser music there but it was in 1980, when I saw the movie THAT'S RIGHT, YOU'RE WRONG on TV, that I became a big fan of the charismatic North Carolina native and his singers--Ish Kabibble, Harry Babbitt, Sully Mason and Ginny Simms.

I bought several books on the Big Bands, hoping to find out more about Kay, but most of them seemed to treat him as just another bandleader, which he was certainly anything but! Either that or as a novelty act because of his hit recording of THREE LITTLE FISHES and others. Kay Kyser, although unique, wasn't just a novelty act either.

I learned more about Kay as I watched for his various comedy musical films to turn up through the years. That and his radio shows.

Now, finally, after more than three decades, I'm pleased to say that Mr. Beasley's book proves to be exactly what I have wanted all along. The book is a perfect mix of Kay's private life and his public one, his serious offstage persona and his often outrageous onstage and onscreen roles. And above it all, his music. His peak era featured the four singers noted above and they're also given their due as major players in the Kay Kyser story with biographical info. Later singers included future talk show host Mike Douglas and future Mrs. Kyser, Georgia Carroll and they, along with many of the musicians who came and went through the years, also get treated with more than just passing nods.

Kyser unceremoniously left show business at the end of the forties and looked back only once, with a solo guest appearance with his old compatriot Mike Douglas, discussing old times. Otherwise, he became quite successful as a Christian Science speaker and businessman.

Posted by Booksteve at 9:37 AM