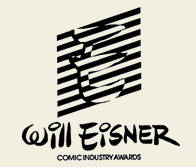 If you're reading this and you work in any capacity within the comics industry, them you're eligible to vote in the 2013 Eisner Hall of Fame Awards now through March 4th. Each year two nominees are automatically chosen. This year, those two are the late Mort Meskin who did superbly stylish work on DC superhero comics and whose work was a major influence on Joe Kubert, Steve Ditko and others. And the recently deceased Spain Rodriguez, the pioneering underground comix illustrator who created, amongst many important features, Trashman.

The others, from which you get to choose four, are as follows:

Lee Falk, who created Mandrake the Magician and The Phantom.

Bill Griffith, who brought the world Zippy the Pinhead.

Jesse Marsh, who brought Tarzan's jungles to life for Dell for many years.

Gary Panter, designer cartoonist known for JIMBO and his work for PEEWEE'S PLAYHOUSE.

If you're eligible, go here to vote:

Posted by Booksteve at 8:57 PM