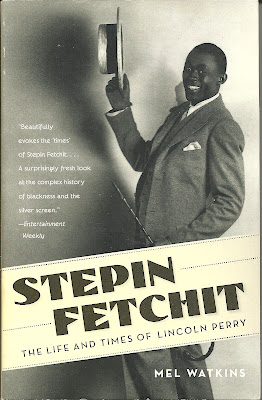 And pioneering he was but controversial to the extreme over time as well. Perry became one of the highest salaried African-American entertainers in the country back in the thirties but he did so by portraying perhaps the ultimate examples of the lazy, shiftless, clueless negro stereotype.

Watkins, author of ON THE REAL SIDE-A HISTORY OF AFRICAN AMERICAN COMEDY (one of my favorite books of the past 20 years) does an expectedly excellent job of leading us through the ups and downs of Perry's life with the final downs owing more to the Civil Rights movement than to anything he did. If he doesn't really succeed in making the reader feel much sympathy for his subject, it may well be that his subject just wasn't a very likable guy.

We see him at the peak of his career, aligned with Will Rogers in various onscreen roles. We see him a favorite of white and black audiences alike and then essentially blacklisted by the latter as an image they didn't want to remember.

In real life, he was a bit of a con artist who took his riches with great aplomb, crying, as they say, all the way to the bank. But when he was down and out--which happened quite a bit--he tended to be mean and grouchy--sometimes to the extreme.

One nit-picky thing about the writer--In his earlier book, he several times wrote of "Ruby" Ray Moore, referred to as "she." This was, of course, RUDY Ray Moore, something I as a middle class white boy knew from DOLEMITE so why didn't he as an expert on black comedy? This book shares a similar tiny issue when Perry is replaced in Muhammed Ali's entourage by Drew Brown, known as "Bundini" Brown. Only here, Watkins refers to him as BOUDINI Brown. Typos? Maybe. But annoying.

Overall, though, this is the fascinating story of the 20th Century Civil Rights movement as seen through the life of one particular man who both helped it along and yet was ultimately unfairly reviled and shunned by it. Booksteve Recommends!

Posted by Booksteve at 8:45 PM