In 1982 I was 23 years old. My mother had just died, I had my first real job and an actual girlfriend. For the second time in my life, I decided that maybe it was time for me to give up comic books.

And then I rediscovered SWAMP THING. 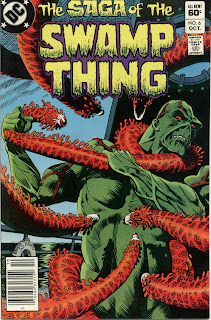 Martin Pasko and Tom Yeates revived SWAMP THING that year...most likely because of the guy in a rubber suit movie version that had just come out.  SWAMP THING had been one of my favorite titles of a decade earlier but the character in these early revival issues had become largely a DC version of The Hulk—a big green guy traveling from place to place helping people while getting chased by homicidal folks thinking he’s a monster.  The art was the best thing about it but it wasn’t really enough to keep me coming back for every issue.

Around this time, though, the independent comics boom began and more and more comics shops opened locally. I decided  to stick around to see where it would all go. Along the way, in 1984, I started hearing about how SWAMP THING had become DC’s best-written and drawn title.  I picked up issue 25…and decided right then and there I could never leave comics again!

The writer was a guy I had never heard of—one Alan Moore. It was, however, without a doubt, the single best-written comic book I had read in ages! Perhaps ever to that point! And the next issue was even better! Before long I would know who Alan Moore was—we all would.

But it wasn’t just the prose! It was the art! Yeates had been attempting to evoke the mood of the original Berni Wrightson issues and succeeding rather well, in retrospect creating, with Pasko, a competent horror comic with stand-alone stories and a wrap-around arc as well. 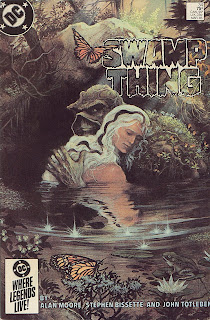 One of his final issues was inked by a John Totleben, another name I had never heard. His addition clearly added a lush quality that the art had not had before. It continued with Totleben inking new artist Stephen Bissette  and then Dan Day on Moore’s first issue. Bissette and Totleben together gave the series an organic feel that worked out beautifully as Moore reinvented the protagonist to emphasize that he is and always has been a plant elemental. At the same time, the art added a unique design sense that had been missing before. And as it was a time of experimentation, DC let them run with it.

Over the next few years, SWAMP THING was consistently the most intelligently written and creatively drawn comic book. It was hard to convince the “outside world” of this but eventually they did take notice. Eventually, it was SWAMP THING’s more adult stories that led directly to DC’s Vertigo imprint, a separate but equal line intended to showcase more mature and/or controversial works of comic art. 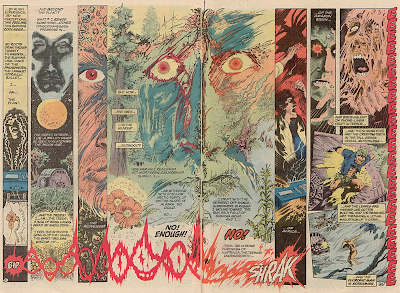 All good things must come to an end. Eventually, Bissette left and Totleben took over the full art for some absolutely amazing issues. Rick Veitch was brought in when he also moved on. Veitch was the perfect person to inherit the title as he had that same edgy eccentricity to his art style. When Moore finally left, Veitch even took over the writing for a nice run of similarly outré stories. 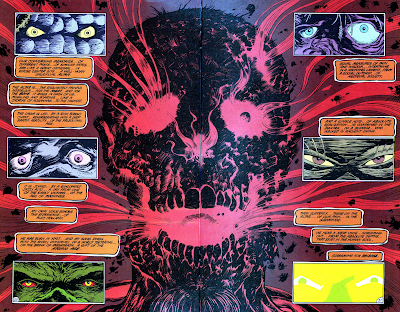 All three of the artists worked with Alan Moore again on Image’s 1963 and Moore’s MIRACLEMAN.  Veitch drew the controversially explicit birth issue of the latter title while Totleben’s beautiful art starkly contrasted the single most violent comic book story ever published in a later issue. 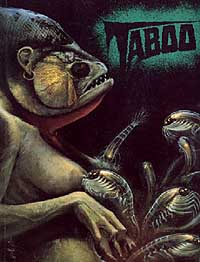 Bissette went on to create Spiderbaby Graphix. His company produced TABOO, an uncensored anthology series of books that, amongst other things, introduced the world to Alan Moore’s FROM HELL and LOST GIRLS as well as Tim Lucas’s creepy THROAT SPROCKETS, later a novel and now about to become a movie. Later he became a teacher and lecturer.

In spite of some major eye problems, John Totleben has turned out some lovely work in recent years. Rick Veitch created a number of edgy mini-series that deconstructed comics myths and legends and runs his own publisher, King Hell Press.

Taking a somewhat different path, Tom Yeates went on to work on a number of licensed characters in comics and newspaper strips including Michael Jackson’s CAPTAIN EO, CONAN, TARZAN and ZORRO. Currently he’s the artist on the venerable PRINCE VALIANT strip! 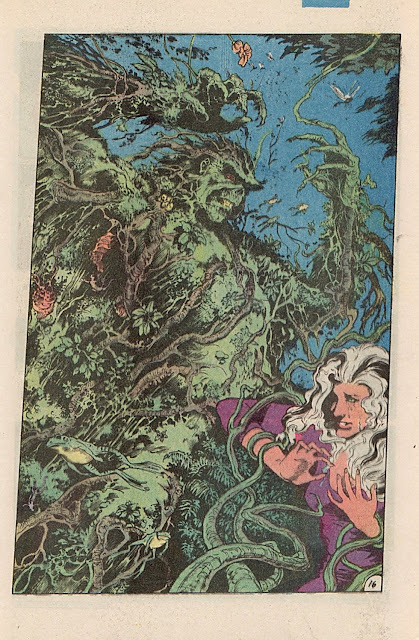 All four of these artists made a difference in comics. They helped them grow up. Along the way, they made them much more acceptable for those of us who had also grown up.

The 2012 CINCINNATI COMIC EXPO has announced the first ever SWAMP THING reunion at this year’s two-day show.  These guys don’t do conventions anymore. They don’t need to. But they’re doing this one. Tom Yeates, Stephen Bissette, John Totleben and Rick Veitch—together again for the first time!
If you’re a comics fan, these guys are important to you whether you realize that or not. They raised the bar. They made it possible for the best comics of today to be that good. They made it possible for “mature” comics not to be all boobs and buns but genuinely involving. Sometimes even genuinely unnerving.

You should, too.
http://cincinnaticomicexpo.com/
Posted by Booksteve at 10:20 AM