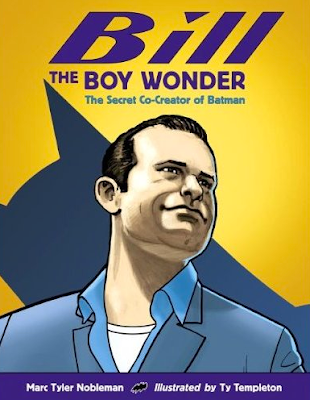 In 1966, at the usual age of seven, I began collecting comic books. It was all Batman's fault. To put it in historical perspective, 1966 was the year of Batmania and I was a Batmaniac...one of hundreds of thousands throughout the US.

My other favorite comic book at the time was GREEN LANTERN. It was the first comic I ever write a letter to although it was never published. I was particularly intrigued to see an issue with a second, red-clad, caped Green Lantern said to be from another Earth! He became a favorite and I anxiously awaited his rare appearances in GL and JUSTICE LEAGUE OF AMERICA.

It wouldn't be until a few years later that I heard the name of Bill Finger...on the half-hearted obits that DC ran for him. Turns out he co-created the original Green Lantern that I had enjoyed so much and apparently written some early Batman stories.

That last statement would, of course, turn out to be an understatement.

Over the years, more and more has come out about Bill Finger and the evidence overwhelmingly indicates that he did much more than write some early Batman stories. In fact, by all accounts, in a perfect world, Bill Finger would be listed alongside Bob Kane as Batman's co-creator!

Over time, it's also come out that Bob Kane was rather a self-serving individual who rarely did anything himself when he could get someone else to do it for him. Bob also liked to lie about that and claim he was doing, for example, all the art on BATMAN, even when it was obvious that there were many different styles involved.

Kane could do this because, due to an absolutely unprecedented legal move--the details of which still remain confidential--soon after the Caped Crusader's initial success, Bob negotiated what's believed to be a huge amount of money as well as sole credit on the Batman strip in comics or in newspapers.

To hear him tell it, Bob Kane apparently spent much time using "I created Batman" as a pick-up line. Bill Finger, meanwhile, wrote comics. Lots of them.

He received credit for Green Lantern from the beginning but, by contract, only Kane's name appeared on Batman. What we know now is that Finger took Kane's rudimentary idea for a "Bird Man" hero and refined it visually and structurally into the Dark Knight we know today. Kane himself peppered the early Batman strips with swipes from pulps and Alex Raymond FLASH GORDON strips. The only originality in the whole thing came from Finger.

Finger's contributions began coming out soon after his death but little was ever really known of the man himself. Now comes Marc Tyler Nobleman, the author who a few years back gave us the deceptively insightful illustrated bio of SUPERMAN creators Jerry Siegel and Joe Shuster, BOYS OF STEEL.

BILL, THE BOY WONDER, THE SECRET CO-CREATOR OF BATMAN, is in a similar format. It's a children's book...only it isn't. Marc did years of research into Finger's life, finding more and more previously unknown bits of information about his life and career, and shares it all here.

The body of the book, illustrated by the wonderful comics writer/artist Ty Templeton, tells the basic tale of Bill's involvement in the creation of BATMAN as we now know it. A more detailed and adult-oriented set of "notes" at the end reveals even more about the mysterious writer as well as about Marc's research itself.

Marc's choice of format is interesting as it gets the word out to even the youngest Batman fans who are likely to find this book in libraries for years to come that "Bob Kane" is not the be-all and end-all he wanted everyone to think he was. In later years, even Kane acknowledged that Bill had a much bigger role in the iconic character's creation than he had previously admitted.

For kids, it's a big colorful picture book with a story both interesting and a little sad. For adult fans, it's a rare chance to get to know more about someone whose work you've admired for years...whether or not you ever heard his name. Who created Batman? Not the easiest question to answer but Marc Tyler Nobleman points his own finger...at Bill.

Posted by Booksteve at 6:17 AM