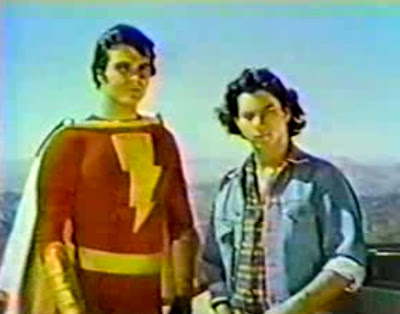 Sometimes I feel like Kevin Bacon. It has gotten to the surreal point that I can't watch much of anything anymore without finding a connection to it. The other night I was watching a random episode of SHAZAM from the seventies just because I hadn't seen it in years. One of the main guest stars in that particular episode I was watching (the first of a two-parter) was actor Derrel Maury (MASSACRE AT CENTRAL HIGH). Mr. Maury, a long-time favorite of mine,  happens to be one of my current friends on Facebook! In fact, when he saw  that I had posted this mage, he was kind enough to give a little anecdotal remembrance.

"This is a funny moment. The guy playing Captain Marvel told me in all seriousness, 'Kid, your close up is next but I want you to know that it’s always best to stand next to the man in the red suit!' Yes it’s true; there are some actors who have very big egos. Thank you Steven Thompson for posting."

As I said, I hadn't seen an episode in years. The first thing that struck me was how bad the acting was from the leads! Both teen heartthrob Billy Gray and Jackson Bostwick, the first of two Captain Marvels on the series, read their lines as if it were an initial read-through! Radio veteran Les Tremayne as Mentor was much more natural but had little to do. The voices of the Elders and even the announcer sounded almost amateurish. By contrast, Derrel, the very definition of a good character actor, gives a polished line reading every time. Even the two other younger guest stars show up the regulars!

I know this was a low-budget kids show but people, come on!

Thanks, Derrel!
Posted by Booksteve at 1:30 AM